'Jeopardy!' Professors Tournament Champ Got a Message From His Lookalike Steve Martin

The first-ever Jeopardy! Professors Tournament wrapped up on Dec. 17 with Sam Buttrey winning the grand prize of $100,000. Viewers have noticed Buttrey’s striking resemblance to legendary actor Steve Martin, and the Only Murders in the Building star apparently caught wind of their parallel images.

Mayim Bialik hosted the inaugural tournament, which began on Dec. 6. Buttrey, an associate professor of operations research at the Naval Postgraduate School in Monterey, California, made it to the finals. He competed against Ed Hashima, a history professor at American River College, and Alisa Hove, a botany professor at Warren Wilson College. Hashima finished in second place with $50,000 in winnings, and Hove came in third earning $25,000.

Fans took to social media to congratulate Buttrey on his win and many pointed out his evident likeness to Martin.

“I seriously thought this was Steve Martin and still do,” a viewer wrote on Jeopardy!’s Instagram account.

“Not hard to believe that Steve Martin went into academia and continues to thrive. Wow,” a fan posted.

“I kept saying how much he looked like Steve Martin! Glad I’m not alone thinking that,” a follower commented.

Buttrey took the comparison as a compliment and is still getting accustomed to his newfound fame.

“It’s been very entertaining for me – I can’t speak for Steve,” Buttrey said, as reported by America’s Navy website. “Steve Martin is not only hilarious, he’s also a serious author and talented musician. I have been told I look like him for years, but I think I saw the resemblance most clearly on the Jeopardy! cameras. … this instant internet-era fame has been a little weird and a little fun – I don’t expect to experience anything like this again.” 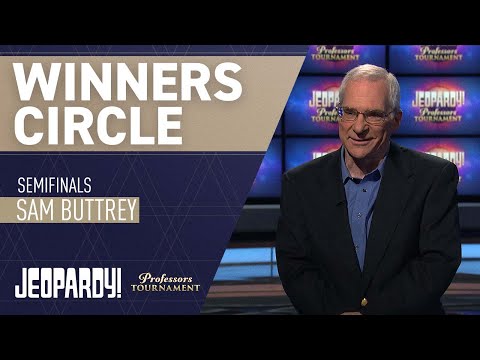 Steve Martin joins in the ‘Jeopardy!’ buzz on Twitter

“We’re giving an A+ to Sam Buttrey for winning our first-ever #ProfessorsTournament! We’ll see him in the next Tournament of Champions!” Jeopardy! tweeted after Buttrey’s win on Dec. 17.

In his trademark humor, Martin posted, “So great to split the prize money with Sam!”

Jeopardy! producers took the opportunity to invite the superstar on the game show, posting to Martin, “We would love to have you on Jeopardy! anytime, in any capacity!”

‘Jeopardy!’ winner will return for ‘Tournament of Champions’

Buttrey gave props to his fellow contestants and shared his gratitude for his Jeopardy! experience.

“This has been the greatest time, and to come out ahead of all these other great players is something I’ll remember forever,” Buttrey said in a statement, according to TVLine. “The group was uniformly so smart, charming, and warm, and there’s been a real feeling of camaraderie from the very beginning.”

Buttrey will join Jeopardy! multi-game winners including Matt Amodio, Jonathan Fisher, Andrew He, Amy Schneider, and Tyler Rhode for the Tournament of Champions in 2022.

“I know there are some strong players, but I want to go up against them,” Buttrey remarked. “I would like to play against Matt Amodio. He’s a strong player, and I’d like to see how I can do.”