Editor’s note: One in a series of remembrances on the 20 years since 9/11.

The biggest Hollywood name among the victims of the September 11 terrorist attacks was Frasier co-creator/executive producer David Angell, who along with his wife of 30 years, Lynn, were among the passengers of the hijacked American Airlines Flight 11 that crashed into the World Trade Center. They were flying from their home in Cape Cod (via Boston) to Los Angeles so David could attend the table read for the next episode of Frasier as well as the upcoming Primetime Emmy Awards, where the show once again was up for a slew of trophies having already set a new record with five consecutive Outstanding Comedy Series wins.

Frasier star/executive producer Kelsey Grammer, who first worked with Angell on Cheers before re-teaming with him and fellow Frasier co-creators/executive producers Peter Casey and David Lee for the spinoff, looked back on the events of 9/11 and his relationship with Angell.

“It is a day of loss that I always remember,” Grammer said. 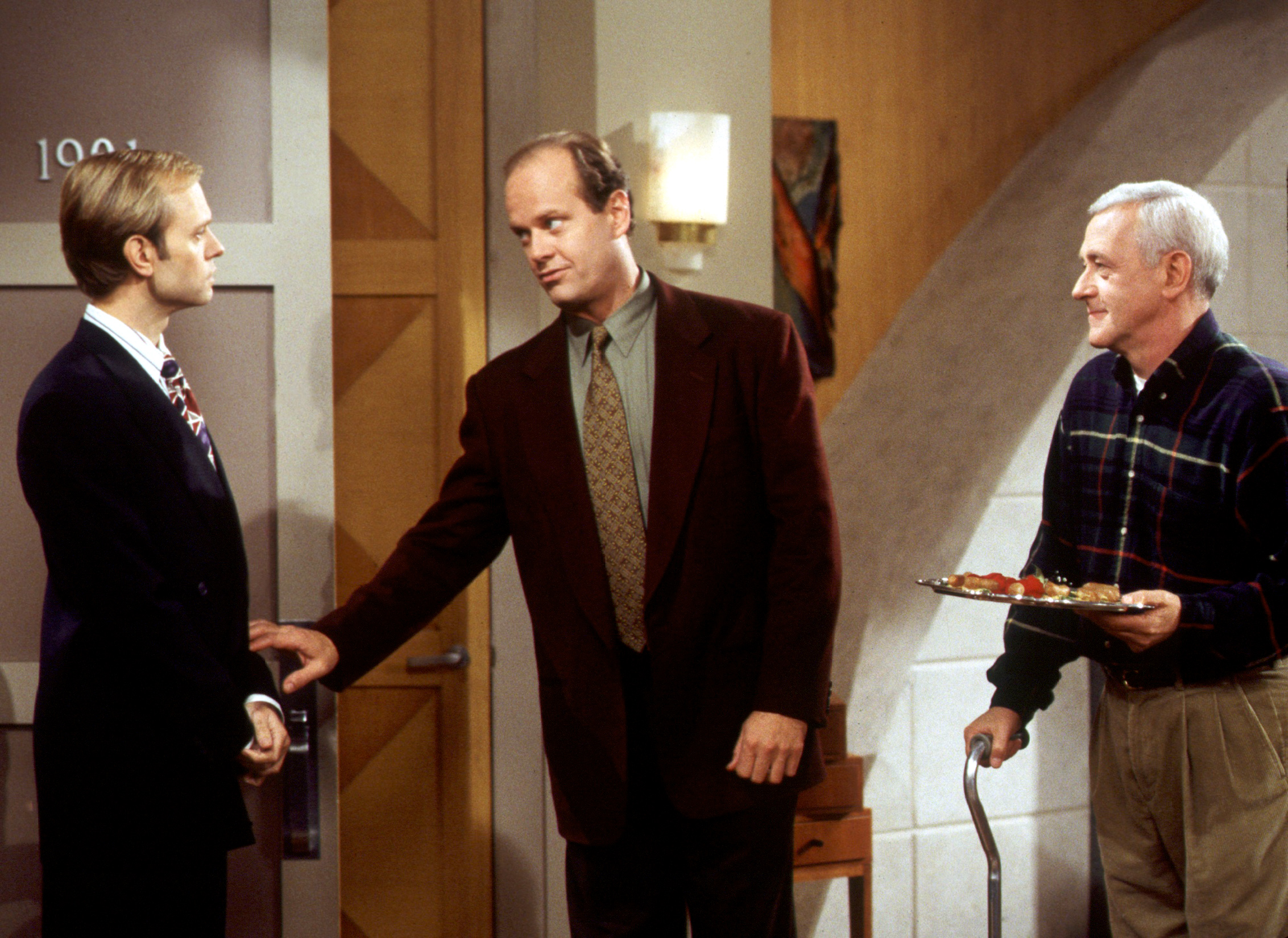 Frasier was not in production on September 11, 2001, so Grammer was home when the attacks happened early that morning.

“I was awakened by a friend of mine who lives in New York. He said, ‘They got us, they got us, they’ve taken out the World Trade towers.’ I turned on the TV and saw what was going on. I remember I’d invited David and his wife to come to a party that weekend; I spoke to him on Saturday. He said, ‘Oh, we were going to come home but we decided we’d stay an extra couple of days. We’re going to come back on Tuesday.’ “

That was the very last time Grammer spoke with Angell. And when the actor woke up to the news of the attacks, one of his first thoughts was about the Frasier co-creator.

“I seem to remember saying to myself, oh, Lord, I hope that isn’t the flight he was going to take home, and then of course I found out that it was.”

Frasier went dark for a couple of weeks in the immediate aftermath of the attacks.

“I think there was some alarm at the studios that there might be something in the works, some terrorist activity, so they locked down the studios, I remember, for at least a few days to make sure there was nothing going on,” Grammer said.

During the break, Grammer reached out to the leadership of New York City. With their permission, on the third day after 9/11 when flights resumed, he chartered a small private plane to visit Ground Zero.

“I ended up bumping into James Belushi there. We spent some time with firemen as they pulled a couple of bodies out of the rubble. That was a very tough day. A nurse came out and said, ‘Will you guys go visit the morgue? There’s no good news here. It might make people feel good to see you there.’ We did that and said hello to the doctors and thanked them. It was a pretty difficult time, but I was glad I went. It was just part of our mourning.”

After production resumed, Angell was celebrated at a memorial attended by people who had worked with him throughout his career, including on Frasier, Cheers and Wings.

“There was a gathering that was put together by the other producers where people got up and spoke about him,” Grammer said. “He was a terrific writer. He was also a really nice guy. It was great to know him, and so losing him was something everybody felt like a gut shot.”

Grammer also shared some personal memories from working with Angell on Frasier.

“I always remember we’d sneak into the coffee shop and talk about what was wrong with the show, just the two of us. We had a nice open dialogue of what we thought was the right way for the characters to go and stuff like that,” he said. “There was one show that we were doing together that I took it very personally. I thought Frasier’s relationship with his dad was the best it’d ever been. Suddenly they both found out they’d been betrayed by their wives. Frasier for the first time was finding out that his mother had actually cheated on his dad, and that his dad had never really said anything. They always thought it was dad that went outside the marriage, and it sort of broke Frasier’s heart. I remember thinking it was okay to end on a bittersweet note. David came up and said, ‘I respect that but it’s still a comedy. We have to do something a little different.’ He always knew what show he was writing. He always knew what needed to be funny. He was always very good at making sure the audience was allowed to leave the room with a laugh.”

Two decades later, Angell, Casey and Lee’s creation has endured. Frasier remains the comedy series with most Emmy wins of all time, 37, and is now plotting a return with a new incarnation for Paramount+ spearheaded by Grammer.