KHLOE Kardashian shared a cryptic quote about living with "darkness" following her ban from the Met Gala earlier this month.

The reality star previously admitted that she was "not OK" after being snubbed from the glitzy event for not being famous enough. 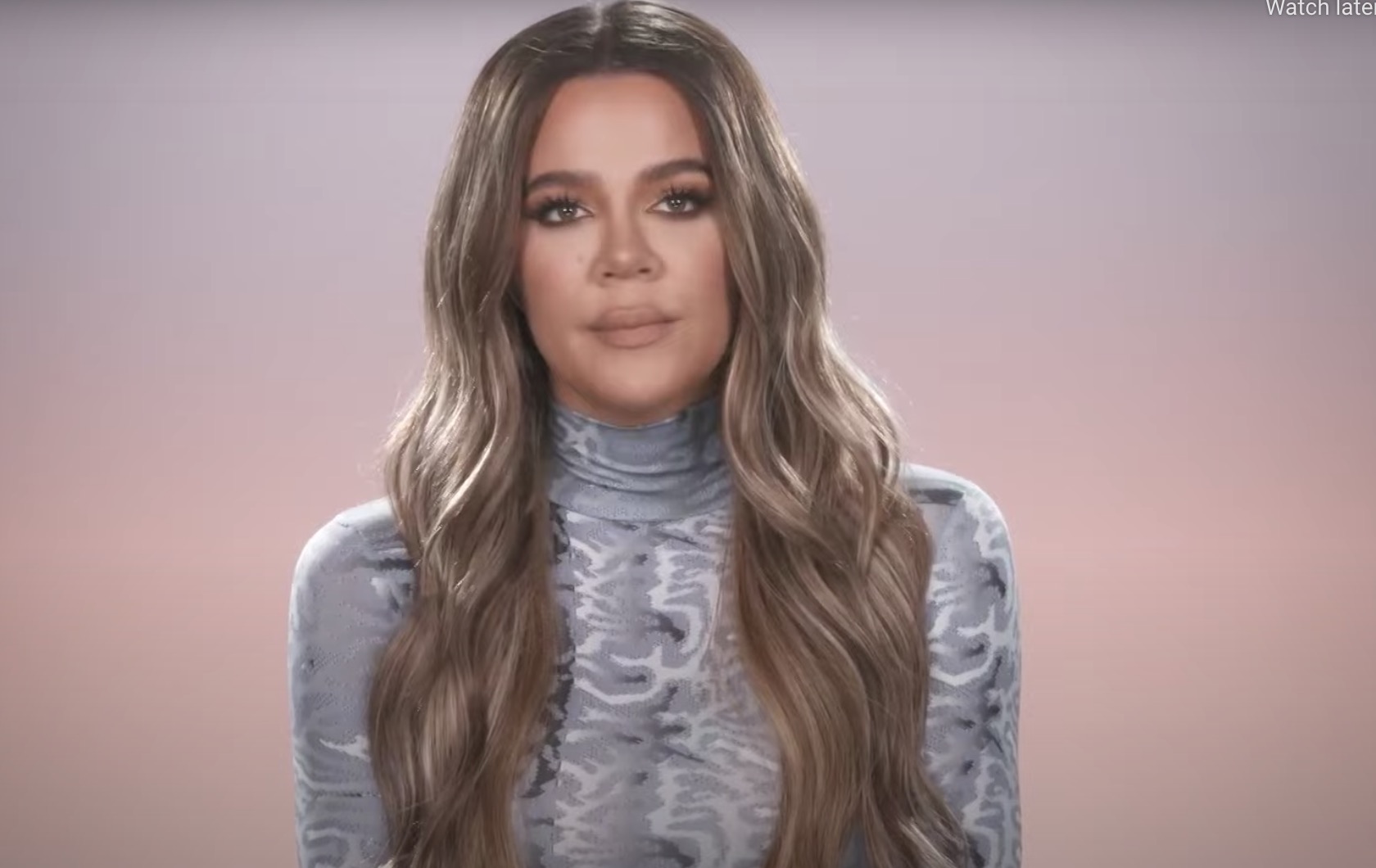 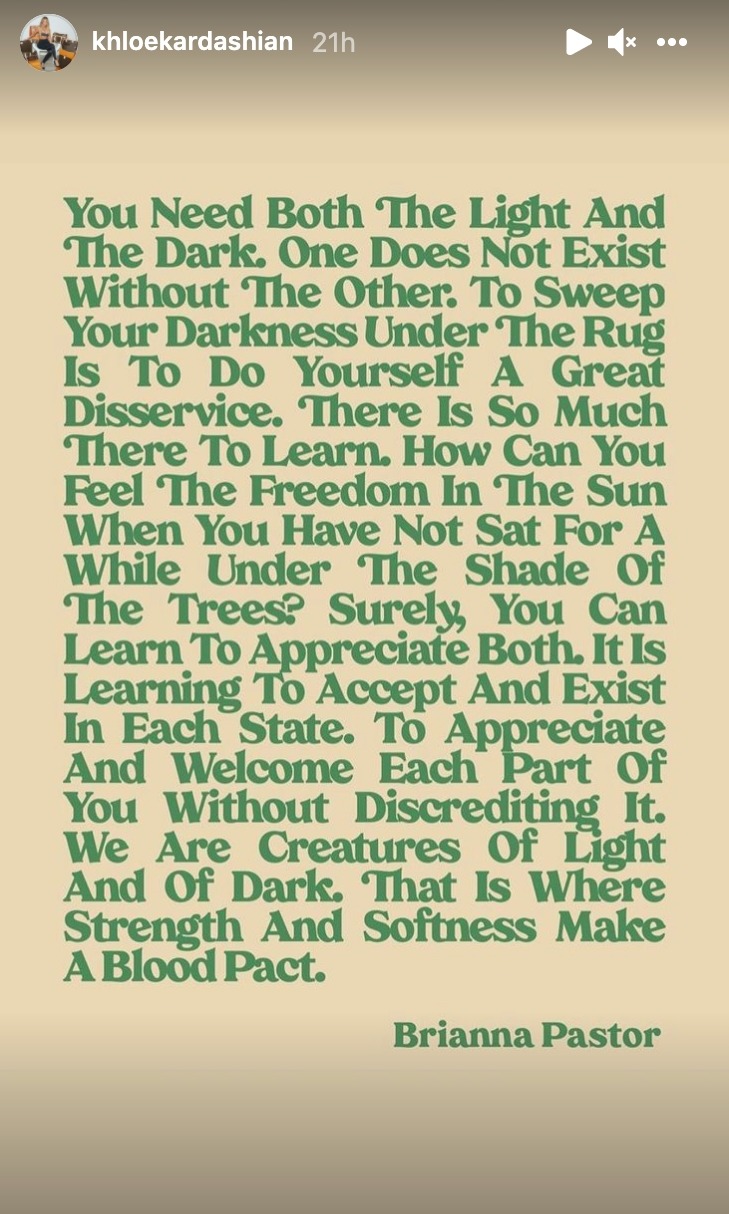 Khloe, 37, has since proceeded to share a series of messages on her Instagram Stories to express her feelings.

The latest post read: "You need both the light and the dark. One does not exist without the other. To sweep your darkness under the rug is to do yourself a great disservice.

"There is so much there to learn. How can you feel the freedom in the sun when you have not sat for a while under the shade of the trees?

"Surely, you can learn to appreciate both. It is learning to accept and exist in each state. To appreciate and welcome each part of you without discrediting it.

"We are creatures of light and of dark. That is where strength and softness makes a blood pact."

Khloe was reportedly banned from fashion's biggest night after being dubbed as "too C-list" by Vogue's Editor in Chief Anna Wintour, who has overseen the Met Gala guest list since 1995.

Khloe, instead, watched the event from home to support her mother Kris Jenner, and sisters Kim and Kendall who were in attendance.

Meanwhile, older sister Kourtney skipped the event with her boyfriend Travis Barker because "she didn't want Khloe to feel left out."

In 2019, a source told Radar Online: "Khloe and Kourtney have never been invited to the Met Gala, but Kourtney was invited to this one and chose to stay home with Khloe because she didn't want to leave her alone."

Khloe is said to have first been kept from the Met Gala two years ago, according to the report.

The source said at the time: "Kim lives for the event and she would never want her Kardashian sisters there because that would take the attention away from her.

"Everyone in the family knows that it is Kim's night. She literally talks about it all year long."

The model appears to have moved on from the scandal with several new projects in the works.

However, her latest project – an ad that featured Khloe topless to promote her Good American jeans line – wound up being banned from television for being "too sexy."

The brand new campaign was created to promote her "Find The One" jeans but features a TOPLESS Khloe rolling around her bed with only the tight denim and a cloth to cover her chest.

Good American "sent the video out to broadcast networks to air this week, but it got rejected during the approval process," the outlet learned, "because it was deemed too risque for TV audiences."

The commercial was intended to be her first-ever television campaign, but she will have to rely on social media promo instead.

Khloe's ad launched Tuesday and showed her embracing body positivity and confidence despite thousands slamming her for her "changing" appearance of late.

In the voiceover, the reality star chanted: "It's just different this time. I feel good, I feel sexy like I don't have to keep looking… I think I found the one."

Fans rushed to the comment section to compliment the mother of one, writing: "She really is a beautiful woman," and "Gorgeous!"

Though a majority of the feedback has been positive on the new ad, Khloe has been seeing plenty of backlash from fans who believe she's looking "unrecognizable."

The reality star's looks were called out after she appeared in a migraine ad earlier this year, where she seemed to have a slimmed-down nose and a completely smooth complexion.

Then, last week, Khloe was featured as the face of the hit mobile app, Candy Crush, where she appeared in a yellow patterned top with long extensions.

The TV personality encouraged fans to sign up for the video game alongside singer Doja Cat and NFL player Rob Gronkowski.

But fans were not pleased by the upbeat performance, slamming her in the comments.

One asked: "What happened to your face @khloekardashian…" while another said, "Faces aren't moving very much." 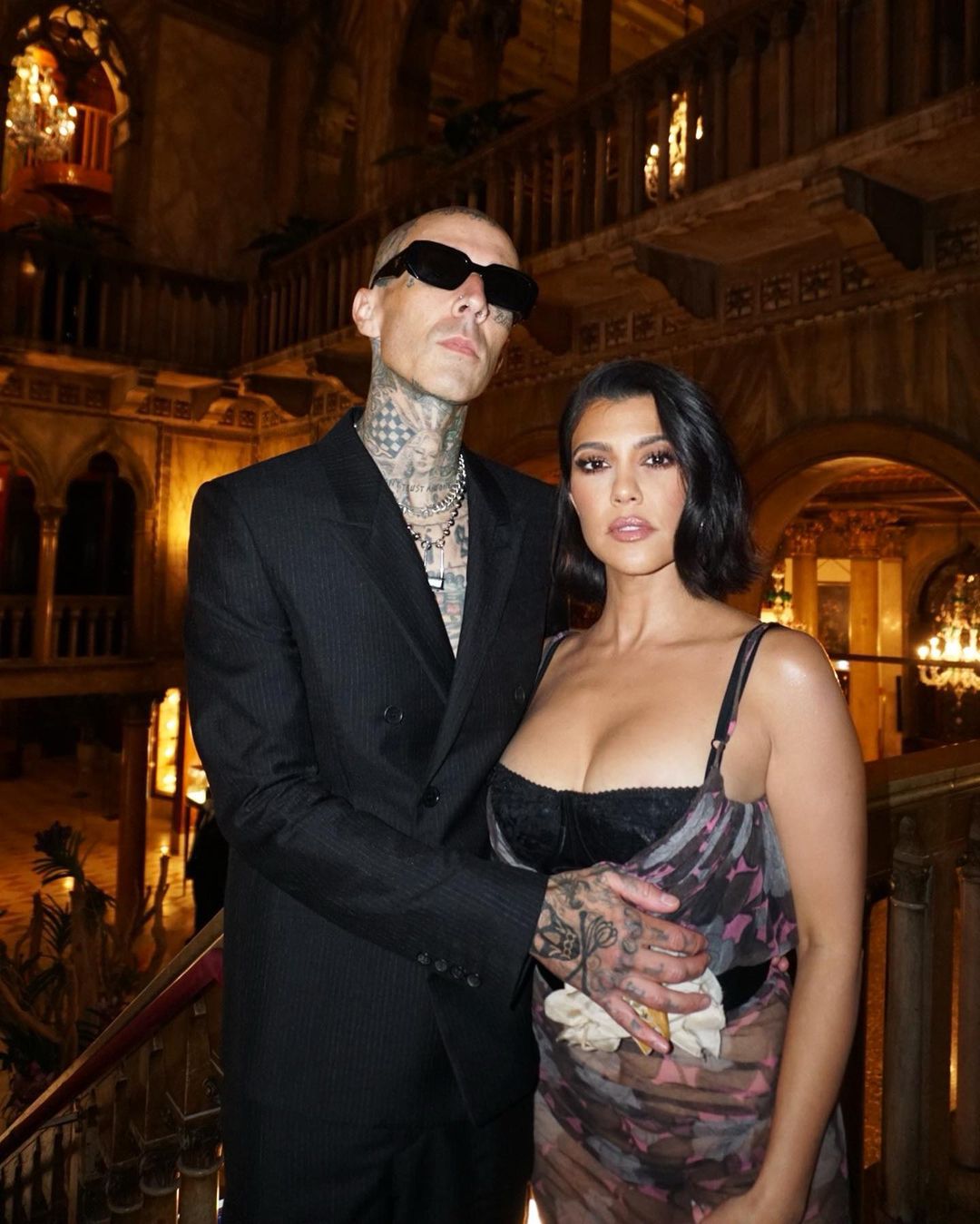 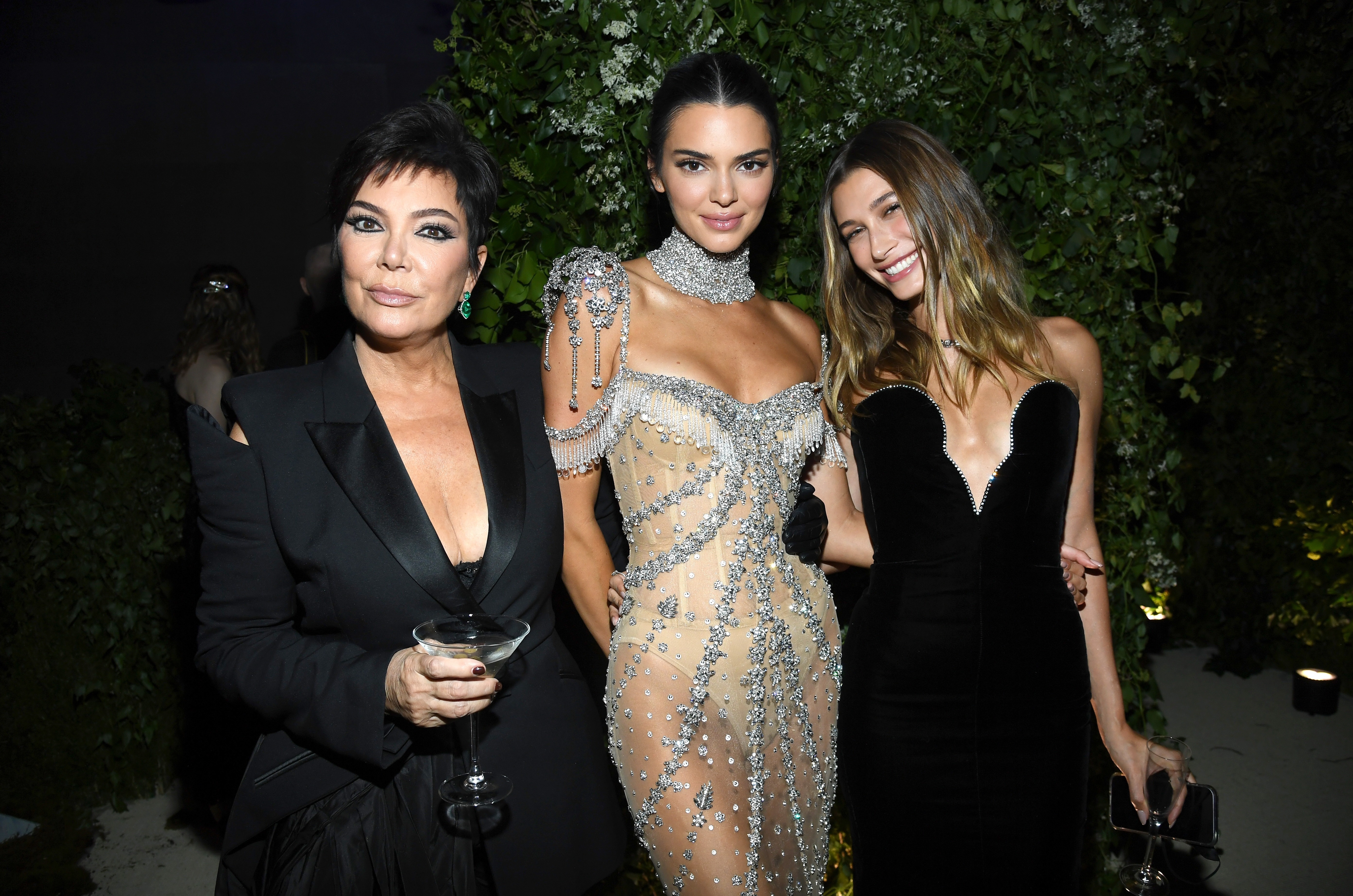 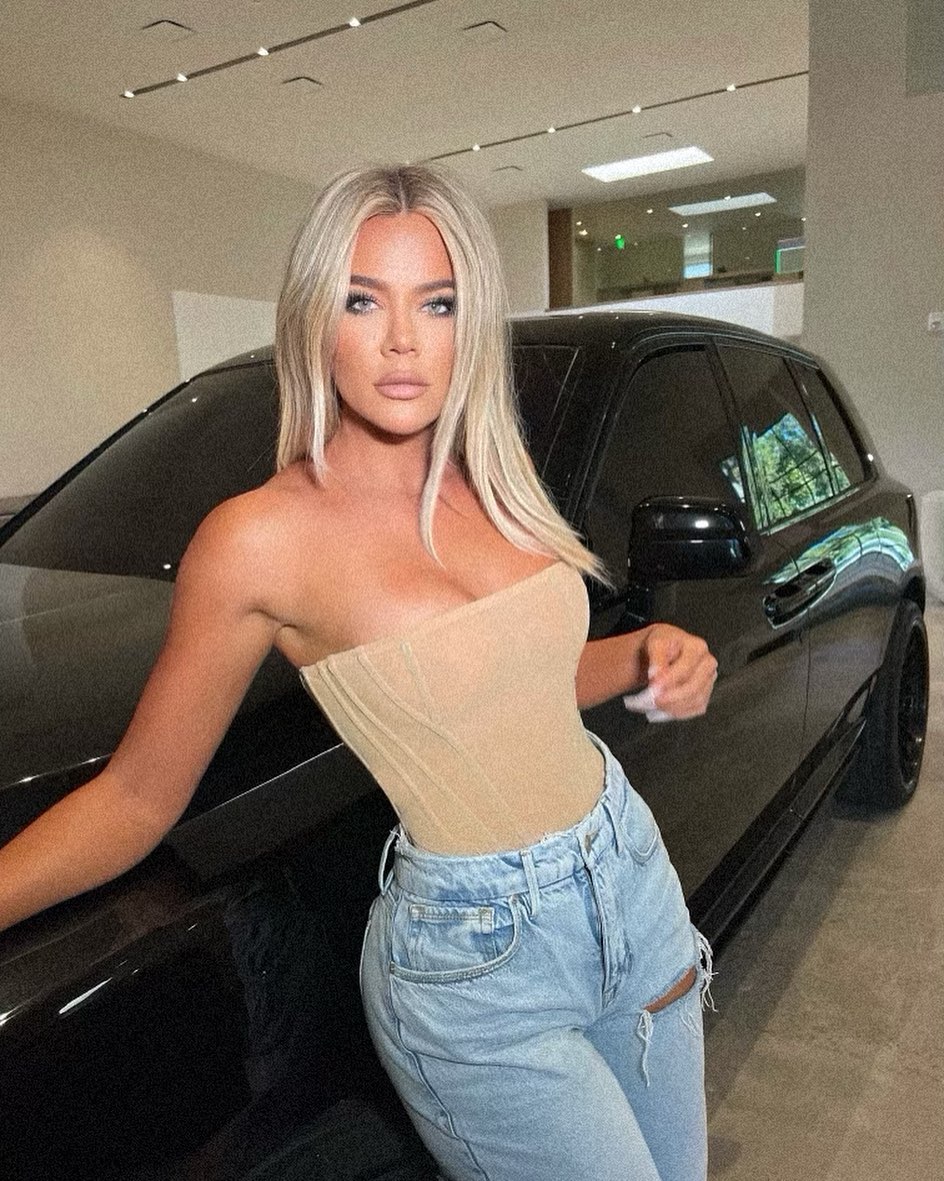