Home » TV & Movies » Kyle Richards and Garcelle Beauvais caught filming scenes together for RHOBH, did they mend their relationship?

Kyle Richards and Garcelle Beauvais caught filming scenes together for RHOBH, did they mend their relationship?

It’s clear that there was no love lost between Kyle Richards and Garcelle Beauvais during Season 10 of The Real Housewives of Beverly Hills.

But now, the two RHOBH castmates might be trying to mend their relationship.

It’s not clear what really started the rift between OG Kyle and newbie Garcelle.

However, last season the actress confronted Richards about not really listening to her during their conversations.

The accusation came as a surprise to the mom-of-four, who shared that she has been nothing but nice to the Season 10 newbie.

At the RHOBH reunion, the women faced off once again about their tense relationship.

And at one point, Kyle accused the Haitian beauty of bidding at her charity and not making the payment.

The shocking revelation put even more tension on their already strained relationship, but maybe the RHOBH castmates are trying to patch things up.

Kyle and Garcelle are filming scenes together

Last week, photos emerged of the two women filming scenes together for Season 11 of The Real Housewives of Beverly Hills.

Garcelle and Kyle were seen having lunch in studio city, with Bravo cameras in tow.

Both looked quite fashionable, with Garcelle clad in a leather skirt and yellow pumps, while Kyle went for a more casual look with jeans and a green Birkin bag.

Judging from the photos, the co-stars seemed to have had a pleasant time.

Let’s hope that they hashed out their differences and we’ll see a blossoming friendship when Season 11 rolls around. 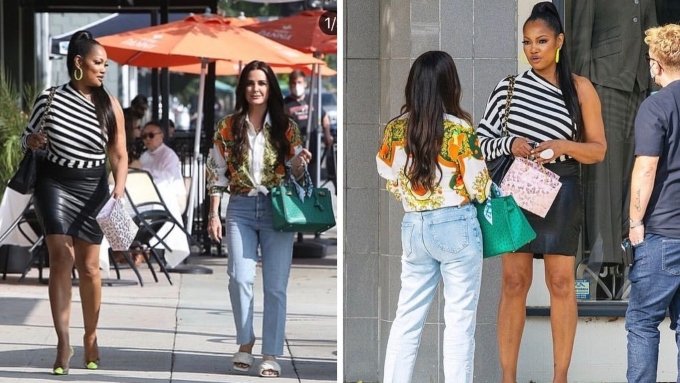 What to expect for RHOBH Season 11

When Season 11 rolls around next year, we can expect to see some cast changes.

As you already know,Denise Richards is no longer a cast member.

After a very rough season– with allegations from Brandi Glanville claiming that they slept together– the actress quit the show.

As for Brandi, many people assumed that after bringing so much drama in Season 10 that the former RHOBH alum would be back on the cast.

However, this is not the cast at all.

So far the network has not asked the controversial former housewife to return, not even in a friend capacity.

Someone else who won’t return to RHOBH is Teddi Mellencamp.

Both Garcelle Beauvais and Sutton Stracke will also return for their sophomore season, with Garcelle as a full-time cast member and Sutton as a friend.

Another possible friend of the show is Kyle’s sister Kathy Hilton, but Bravo has yet to officially confirm this.

The Real Housewives of Beverly Hills is currently on hiatus on Bravo.