At this year’s Sundance Film Festival, the biggest acquisition story was a two-for-one: Amazon Studios picking up not one, but a pair of female-centric comedies (in addition to other high-profile buys, like “The Report” and “Honey Boy,” the kind of awards players the company has gravitated to in the past). As Amazon chief Jennifer Salke explained to Deadline after picking up both “Late Night” and “Brittany Runs a Marathon” at the festival, these were films that fit Amazon’s evolving mandate to find projects that appeal to female moviegoers in search of “really authentic, emotional, relatable, really well-executed content.”

But many audiences are also interested in something else that “Late Night” offers in spades: the kind of appealing comedy that studios are struggling to make these days. While studios haven’t been churning out comedies the way they did in previous decades, recent additions to the genre have broken out in big — and often unexpected — ways. That’s why the failure of “Late Night” stings so hard.

There was last year’s surprise hit “Game Night,” which earned both critical support and over $115 million at the box office with what sounded like a a relatively tame premise. And while “Game Night” was the studio comedy story of the year, it wasn’t alone: teen-centric “Blockers” made nearly $100 million of its own, and even the critically maligned “Tag” made over $75 million last summer.

As has always been the case with comedy, the genre is able to use humor to tackle tough topics. In divisive times, laughter has a unifying power. All the better if they can smartly fold in social commentary like their best predecessors, which is something that “Late Night” does exceedingly well.

While “Late Night” might hinge on an insider-y premise — following star and screenwriter Mindy Kaling as the plucky Molly, who lands her first writing gig on Emma Thompson’s character’s faltering late night chat show — the film is bolstered by classic humor, a smart script, and winning performances by its entire cast. “Late Night” smartly sends up not just the cloistered world of late night television, but a cultural climate struggling to evolve in a changing world.

The film also uses its funny setup to dig into buzzy social issues with humor, from the groundswell conversations about diversity and inclusion in the workplace to women continuing to find for equality even once they do land a job. That the film is set inside the late night world, which so desperately needs to have its own reckoning with its continued lack of female hosts, only adds to its timeliness. Just imagine how “Late Night,” if it had become a pop culture phenomenon, might have impacted broader discussions about the need to shake up and diversify this antiquated format.

Kaling mines the scenario for humor and insight in graceful ways. Setting the film inside the late night world might sound limiting, but it’s actually a clever way to allow its characters to poke fun at all kinds of situations, from the rise of YouTube influencers to gags about menopause. Like any good late night chat show, it covers the full spectrum. To that end, the movie illustrates just how much late night television can actually provide an access point for engaging with the world as a whole. Of course a movie about the late night landscape is funny, but never without purpose. 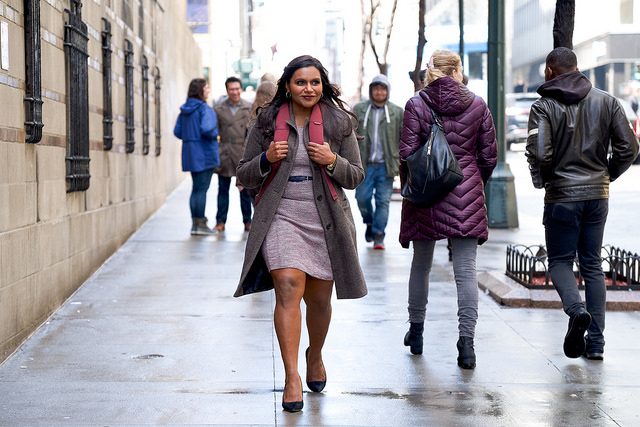 Kaling, who also wrote and produced the film, makes off with a stellar on-screen turn as well, turning Molly into a cheerful striver who doesn’t have any of the prickliness or ditziness of her best known roles, Kelly Kapoor and Mindy Lahiri. Her first day in the office, bright-eyed Molly shows up with boxes of cupcakes for her new co-workers, because the internet told her it was the proper thing to do.

It’s as charming a role as Kaling has ever played, but she doesn’t let that stop her from dipping into a different box of comedy tricks, often at Molly’s own expense. That cupcake gag? It’s followed almost immediately by Molly being admonished by her new boss, Thompson, as the iron-willed Katherine Newbury, and being forced to sit on an actual garbage can. It’s a classic kind of joke, and Kaling and her cohorts dig into it with aplomb. At the same time, it speaks to genuine struggles of a cutthroat workplace environment in which the need to be funny runs counter the serious pressure facing a network in decline.

The film’s marketing — which reportedly cost $33 million, nearly three times as much as the price Amazon paid for the film itself — didn’t do the comedy any favors, with trailers leaning hard into the “but she’s a woman!” angle that has less to do with the film’s best bits than as (literally) advertised. The jokes, at least the ones that were shown, are some of the weakest in the film. It just didn’t look funny; it didn’t really look like a comedy. Make no mistake: “Late Night” has depth, but it also has jokes.

Still, the movie does take a dramatic turn in its second half, moving from pure comedy into a heavy-hitting reality check. It’s an arena that plenty of comedies have explored before, and it works because the film has earned enough goodwill to ensure audiences care about the characters it impacts the most.

While the central drama of the film is established early on — Katherine’s show is failing, she needs some fresh material, her writers’ room is staffed with dudes who have no idea how to write for a woman — a secondary issue emerges when Katherine is targeted by accusations of sexual impropriety in the workplace. Essentially, she’s “MeToo”-ed, the unexpected aggressor and perpetrator of the same bad behavior that most people expect from male counterparts. The revelation threatens Katherine’s show, endangers her reputation, and ruins her personal life. This twist allows both “Late Night” and its characters to move towards an emotional climax, one that gets life from an honest, funny monologue that Katherine unveils to the world. At long last, she gets real with her audience, and they dig it.

At Sundance, Thompson was hailed for her performance as the prickly, then cowed, then enlightened Katherine, with some calling for her to be considered for the Oscar race. Given that “Late Night” will likely not even crack the $20 million mark at the box office, the awareness isn’t there and, when awards season proper kicks in, Thompson’s turn will presumably be forgotten during the influx of contenders.

It’s another casualty of the film’s lukewarm reception and marketing, but it’s hardly the only one. The marketplace has suffered too, and with it, a genre in need of more attention than ever. “Late Night” has a lot to say about the way the world is changing, and why even people tasked with writing punchlines can play a role in fixing it. It’s a powerful message, but not enough people heard it.