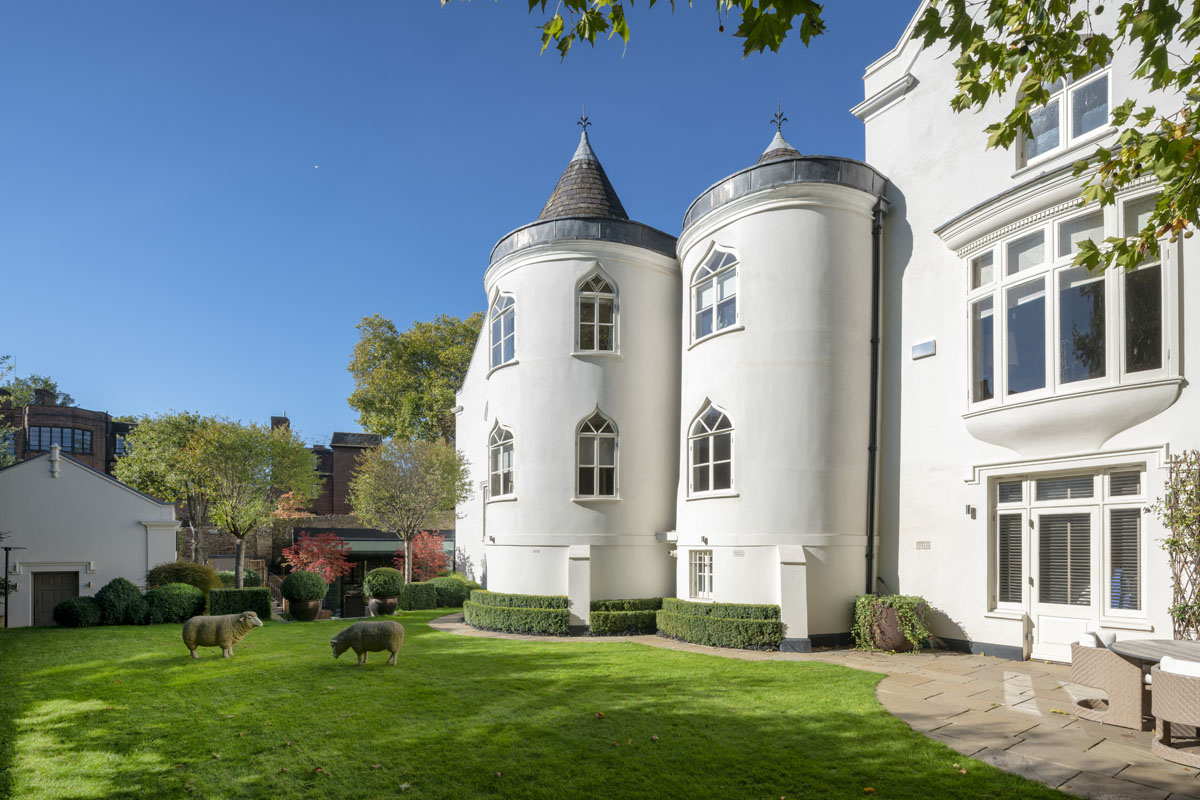 Do you dream of living life like a London royal?

This place won’t quite get you into the Royal Family, but it’ll help you pretend.

Hunter’s Lodge is a castle-style mansion sitting in London’s Belsize Village, just off the posh area of Belsize lane.

We say ‘castle-style’ because it really does look like a castle – there are turrets and towers and all.

The Grade II listed Georgian mansion was built in 1810 by architect Joseph Parkinson, and recently modernised, with a new-build extension and a ‘leisure floor’ in the basement.

What would you get for that lump of cash, beyond bragging rights?

Let’s break it down, floor by floor.

Overall, the house has 7,594 sq foot of space, spread over four floors.

We’ll start at the bottom, in the basement, where there’s a large swimming pool, a games room, a health suite complete with a gym, steam room, and treatment room, and your very own cinema.

The entire level has been dedicated to fun and relaxation, and has glorious 8ft tall ceilings to create an airy feel.

Next up is the garden floor, which has an upper and lower level.

Each of these open out to south-facing gardens, hence the name, but there’s more fun inside.

On the upper level sit two guest suits and an en suite bathroom, while on the lower part is a living room, – with a floor-to-ceiling marble fireplace – a family kitchen and breakfast room, and a wine tasting and cigar room, with an adjoining glass-walled wine and champagne cellar.

Then, upstairs again to the ground floor, you’ll find the dining room, which seats 12 to 14 people, and a rather grand reception room and library, with another impressive marble fireplace.

There’s also an office space, a drawing room, and a morning room, because who doesn’t need a room only for the first part of the day?

Finally, the first floor, which is where the main bedrooms are.

On this level is the principal bedroom suite, which has luxurious double bathrooms, plus another main bathroom on a mezzanine above, and a dressing room.

There are three more bedrooms on this level, including a guest suite with a dressing room and en suite.

In case that’s not quite enough room for you, please note that there’s a 523 sq ft guest cottage beyond the garden, with its own independent street access.

This is the first time in 13 years that the property, which was reviewed in Country Life back in 1943, has been on the market.

It history includes royalty, aristocracy and a Prime Minister.

The origins of the current property date back to 1496 when a manor house, known as Belsize House, was built off Belsize Lane, complete with a lodge house.

In 1542 the Belsize House estate was given to the Dean of Westminster by King Henry VIII, with the manor house and lodge leased to wealthy tenants to generate income for Westminster Abbey.

Then, between 1661 and 1798, the house and lodge were leased by the Chesterfield family, followed by Charles Povey hiring the estate for parties that hosted the then Prince of Wales.

Spencer Perceval, who went on to become British Prime Minister, rented the house between 1798 and 1807. He left for Downing Street, leaving the property to be divided into several freehold plots.

As a result the lodge house was put up for sale, and later in 1853 Belsize House was demolished.

In 1808 the lodge house was purchased by wealthy City of London merchant William Tate – a relative of the Tate & Lyle dynasty. He commissioned an architect to build him a new mansion on the site – what is now Hunter’s Lodge.

In the years since then, owners have brought the home up to date, with all the top-level plumbing, heating, air con, and tech you’d expect.

But it still looks like an old-school castle from the outside.

‘An abundance of outside and inside living space has the additional benefit of a leisure floor with a cinema, gym and swimming pool and a separate guest cottage/studio which could be used for a business, work-live space, home schooling or exercise studio.

‘It is one of the finest residences to come onto the Belsize Village housing market in many years.’

Sounds good to us. If you’re keen to put in an offer, you can contact Aston Chase and Savills for further information.