The ITV Good Morning Britain host confronted Michael Gove over the list of mistakes made by the UK Government since the start of the coronavirus pandemic, highlighting Britain is currently suffering from the worst death toll in Europe. Piers Morgan blasted: “You know as well as we do that we were told to wait till the end of the year before we could make any kind of overview presumption about how you handled the pandemic.

“This country has spent more money than almost any other comparable country.

“We’ve achieved the worst economic performance of pretty much any comparable country.

“How did we get to this place? You’re one of the most senior members of Government, do you accept it has been an abject failure.”

As Mr Gove gave a straight “no” answer, the ITV host fumed: “Really? Which part of what I said is not a failure?” 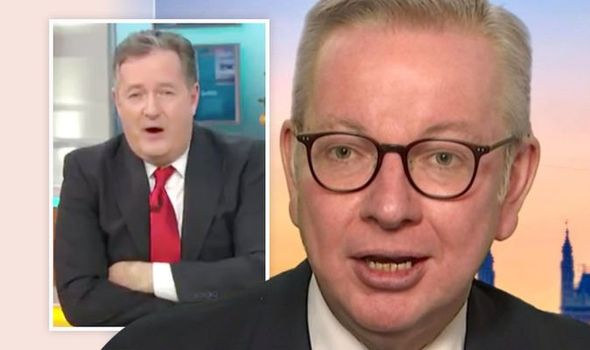 The Tory frontbencher replied: “Firstly, we’re not through this yet.”

But before he could continue, Piers raged again: “You keep saying that because it buys you time, but the stats don’t lie.

“We have had a disastrous economic performance this year, the whole year now and we’re reaching the end of the year.

“We’ve had a disastrous death toll, it’s either your official number, which we know it’s not the real one.

“The Financial Times estimated the Covid death toll is now over 70,000.

“Put in context, Michael Gove, that is more than the entire number of civilians who died in the United Kingdom during the entirety of World War 2!

“What part of this is not a disaster?”