Home » TV & Movies » Owen Jones has head in hands as Piers humiliates him: ‘Do you not sign off these things?’

Owen Jones has head in hands as Piers humiliates him: ‘Do you not sign off these things?’

Good Morning Britain hosts Piers Morgan and Susanna Reid welcomed columnist Owen onto the show to talk about Prime Minister Boris Johnson’s address to the public last night. However, talk soon turned to Labour leader Sir Keir Starmer’s speech as he distanced himself from previous leader Jeremy Corbyn and Owen’s latest book, This Land: The Story of a Movement.

After watching a clip of Sir Keir talking about the difference between Labour under his leadership compared to Corbyn’s, Owen gave his opinion on why the stance on Brexit often changed.

“Because of that relentless zig-zagging over Brexit because they weren’t clear after the 2017 election, ‘This is what we think on Brexit guys, we’re sticking to this no matter what,’ it meant they were dragged in that direction and Jeremy Corbyn looked like this vacillated,” Owen began before he was cut off by Piers.

The host quickly turned attention to Owen’s book and teased him about the praise he’d included on the cover.

He asked: “Let me ask you this, is there much point, look, the book is very well-written as always. 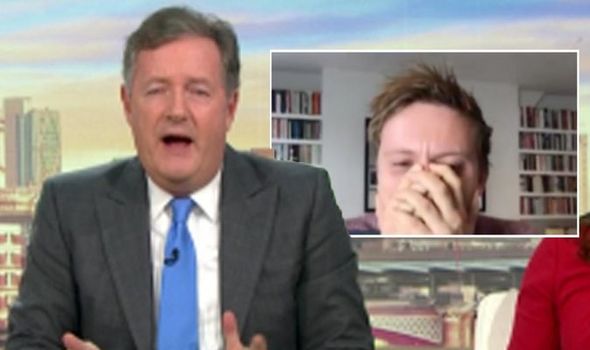 “You modestly have Russell Brand on the back describing you as our generation’s Orwell, which I think is something even I have hesitated about doing on my book but I salute you.”

Owen put his head in his hands as Susanna remarked: “You don’t look proud of that.”

“If Russell Brand calls me the new Orwell, it will be on the back of my book,” Piers continued.

“In the end, this book is quite a revisionist book about what happened with Corbyn.

“Do you accept what Keir Starmer has done? He has put a slam dunk line in the sand now between him and all things Corbyn.

“He’s done it because he thinks it’s the right way to get elected.”

“Well firstly, I did not design my book jacket and that’s all I’m going to say on that matter,” Owen explained.

Piers hit back: “Do you not clear these things? We’ve had this chat before.

“Do you not clear these things, I’ve just signed off on every word of my book.”

“I think I need your level of control freak,” Owen answered as Susanna advised: “Stick it in the contract.”