Phillip Schofield was visibly bemused on today’s This Morning when interviewing a woman and her fiancé who she breastfeeds, questioning how the activity fits in with their morals given they are vegan.

Last week, a documentary titled Breastfeeding My Boyfriend aired on Channel 4, introducing viewers to Lana Michaels and her partner Shawn.

The couple, who are in Spain and first met on a vegan dating app, produce adult content together online.

On Monday’s edition of This Morning, the couple were interviewed by Phillip and Holly Willoughby, who asked them about the reaction the documentary received from viewers and the way in which they associate adult breastfeeding with being a sexual activity.

Shawn explained that veganism ‘is a movement in order to protect the rights of animals’, whereas Lana has made a choice to breastfeed. 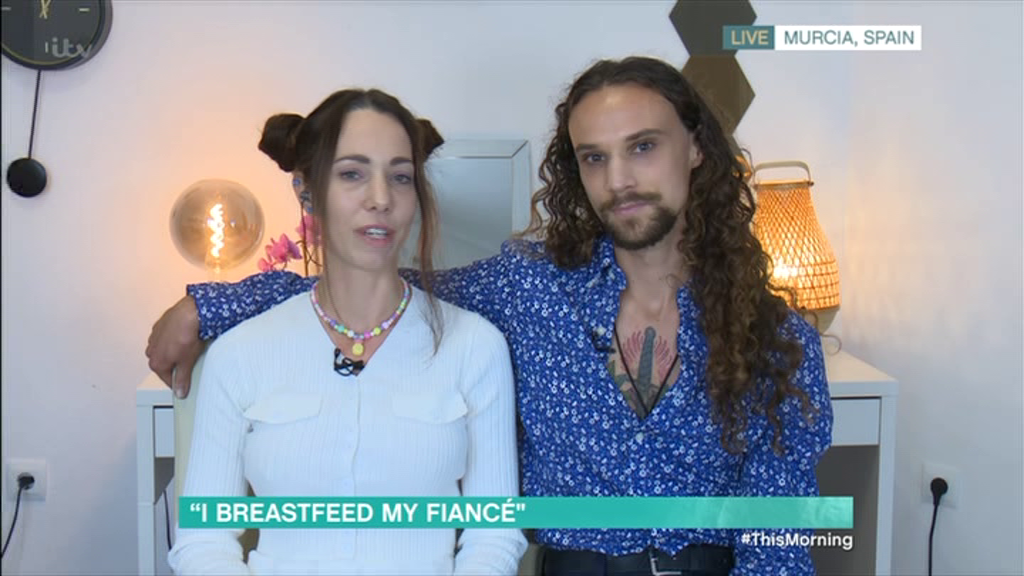 ‘The thing is that veganism is a movement in order to protect the rights of animals. Obviously she’s an animal, but she’s an animal that is willing to breastfeed. She’s happy to do it as long as she’s happy,’ he said, as Lana added: ‘It’s about consent.’

Shawn continued, outlining why there’s a difference for them between consuming human breast milk and cow’s milk.

‘When it comes to cow’s milk, it’s different. The cow perhaps is not happy with the situation. That is not vegan, because you’re enslaving an animal,’ he said.

‘But in our case, it’s all about consent. Of course a vegan person, vegan baby, is going to breastfeed.’

Phillip asked the couple whether they ever save the milk for their coffee or cornflakes.

‘No. It just goes straight into my mouth,’ Shawn replied, chuckling.

While Lana said that her family is ‘really accepting’ of the fact that she breastfeeds Shawn, he said that his mum is ‘getting there’ with her understanding.

‘It needs to evolve to mature the idea, and I think interviews like this are going to help normalise the situation,’ he said.

Lana added that she has considered donating her breast milk to a food bank, as she believes it would be a ‘kind thing to do for women that can’t breastfeed’.

After Phillip and Holly said goodbye to Lana and Shawn at the end of their interview, the camera cut to their next interviewee, Gary Lineker, who couldn’t contain his laughter.

Phillip and Holly also appeared to start laughing in the ITV studio just before the adverts started rolling.