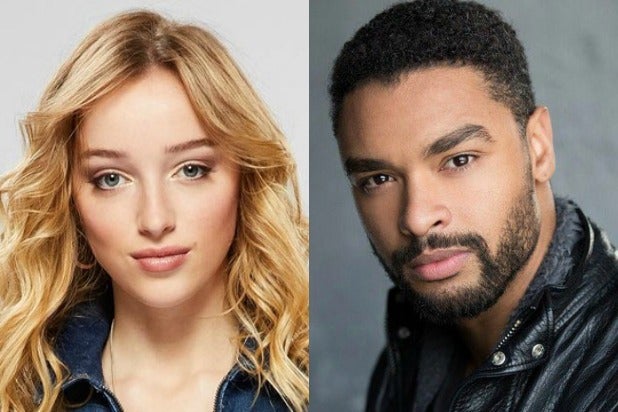 Phoebe Dynevor and Regé-Jean Page have been cast as the leads of the Shonda Rhimes-executive produced “Bridgerton” series at Netflix, the streaming service said Wednesday.

As TheWrap previously reported, Julie Andrews will voice Lady Whistledown, a “mysterious, sharp-tongued gossip writer” who acts as narrator for the series.

Based on Julia Quinn’s best-selling series of novels, “Bridgerton” is set in the sexy, lavish and competitive world of Regency London high society. From the glittering ballrooms of Mayfair to the aristocratic palaces of Park Lane and beyond, the series unveils a seductive, sumptuous world replete with intricate rules and dramatic power struggles, where no one is truly ever on steady ground. At the heart of the show is the powerful Bridgerton family. Comprised of eight close-knit siblings, this funny, witty, daring and clever group must navigate the upper ten thousand’s marriage mart in search of romance, adventure and love.

“We could not have found a more gifted group of actors to bring ‘Bridgerton’ to life,” Van Dussen said. “When creating this series, the goal was to turn a very traditional genre on its head and make something fresh, smart, sexy and fun. That’s exactly what this cast embodies and I’m ridiculously excited to see them inhabit these characters and captivate viewers in their own incredibly brilliant ways.”

Van Dussen, Rhimes and Betsy Beers will executive produce the series, which will be filmed in London and is set to launch on Netflix in 2020.

See below for the official character descriptions for the new cast members.

PHOEBE DYNEVOR (“Younger,” “Dickensian”) will play “DAPHNE BRIDGERTON.”
The picture-perfect young debutante has been waiting her entire life to make her grand debut on the marriage mart. Poised to be the season of 1813’s forthcoming Incomparable, Daphne’s set to take the town by storm – but not everything goes exactly as planned for this diamond of the first water, especially after she meets a certain Duke.

REGÉ-JEAN PAGE (“For The People,” “Roots”) will play “SIMON BASSET.”
Having newly returned to London, the Duke of Hastings finds himself the primary topic of conversation amongst marriage-minded misses and ambitious mamas alike. Yet, for reasons of his own, our devastating Duke has zero interest in his title, society, or taking a wife.

GOLDA ROSHEUVEL (“Silent Witness,” “Lady MacBeth”) will play “QUEEN CHARLOTTE.”
The veritable tastemaker of London society, Queen Charlotte finds herself living for the sordid gossip that Lady Whistledown prints, though she’d swear she’s above such mundane musings. It’s only when the ton’s newest gossip writer takes aim at the palace that Queen Charlotte knows she must do something about it.

JONATHAN BAILEY (“W1A,” “Broadchurch”) will play “ANTHONY BRIDGERTON.”
The quintessential English nobleman, Anthony is the eldest Bridgerton sibling and dutiful head of the family since assuming his late father’s title of Viscount. Endlessly handsome, charming and rich, he’s quite the catch on this year’s marriage mart. But if he has any hope of fulfilling his oftentimes overwhelming duty of marrying and producing an heir, Anthony must first learn to temper his pursuit of pleasure.

LUKE NEWTON (“The Lodge,” “The Cut”) will play “COLIN BRIDGERTON.”
The dashing Colin Bridgerton is used to disarming his fellow society members with good-natured jokes, though a serious sense of adventure lurks behind those swoon-worthy eyes. Colin takes a liking to the newest young lady in town — but it’s this infatuation that winds up giving him more than he may have bargained for.

CLAUDIA JESSIE (“Vanity Fair,” “Doctor Who”) will play “ELOISE BRIDGERTON.”
Whip-smart, brazen and rebellious, Eloise Bridgerton is definitely not here for turning into just another young simpering and mincing debutante. She believes she’s destined for something much greater, though she’s quite rapidly approaching marriageable age.

NICOLA COUGHLAN (“Derry Girls,” “Harlots”) will play “PENELOPE FEATHERINGTON.”
A vastly intelligent girl with a sharp wit and kind heart, Penelope would prefer to quietly sway near the perimeter of any ballroom rather than take center stage. She’s been born into a family who will never truly understand her–as if dealing with the cutthroat, mean girls of 1813 Regency London weren’t enough.

RUBY BARKER (“Wolfblood,” “Doctors”) will play “MARINA THOMPSON.”
Having been sent from the country to live with her cousins, the Featheringtons, Marina never imagined being a part of London society. Yet the arrival of this resourceful young lady seems to make more than just a splash in our glittering, exclusive world.

SABRINA BARTLETT (“Victoria,” “Knightfall”) will play “SIENA ROSSO.”
The beautiful, captivating, and enterprising opera singer who’s having a secret affair with a prominent lord. Fun and a bit impetuous, Siena secretly longs to be a part of our town’s world.

RUTH GEMMELL (“Deep State,” “Penny Dreadful”) will play “LADY VIOLET BRIDGERTON.”
All warmth, wisdom and love, the Bridgerton matriarch manages to treat everyone with unmatched kindness and respect. But don’t mistake her compassion for weakness – as she’s an impressive match for anyone who dares comes close to interfering with her family. She’d like nothing more than for her children to marry – not for convenience or opportunity, but for love.

ADJOA ANDOH (“Thunderbirds Are A Go”) will play “LADY DANBURY.”
The legendary, acerbic, lioness of a dowager who runs this town. Unconcerned with the rules of polite society, Lady Danbury is a straight shooter – both formidable and a little scary. And while her judgments may be sharp, they’re always accurate. She is a friend of Simon’s late mother, having shown the now Duke a rare kindness when he was a child.

POLLY WALKER (“Pennyworth,” “Age Before Beauty”) will play “LADY PORTIA FEATHERINGTON.”
Perhaps the most ambitious mama of all, Lady Featherington is determined to make advantageous matches for each of her daughters – and is forever pushing them on some rather disinterested parties. Cunning and ruthless, Lady Featherington hustles to get what she wants, no matter the cost.