Prince Charles’ decision to ‘deny Archie right to be prince’ blasted ‘It’s out of spite!’

Prince Charles has reportedly told the Duke and Duchess of Sussex their son Archie will never become a prince. Jeremy Vine discussed whether this was the right thing for the heir to the throne to do with guests Dawn Neesom and Nina Myskow. Dawn argued Charles had been looking to slim down the Royal Family for years while Nina felt the decision would be made out of “spite”.

Dawn began: “Charles has said for years he wants to slim down the royal family and I think most of the public agree with him.

“It’s nothing to do, for once Harry and Meghan it’s not about you.”

“It’s not about getting one’s own back?” Jeremy asked Nina.

“I think it’s some sort of spite I really do I think it’s really mean because they’re entitled to that,” Nina replied. 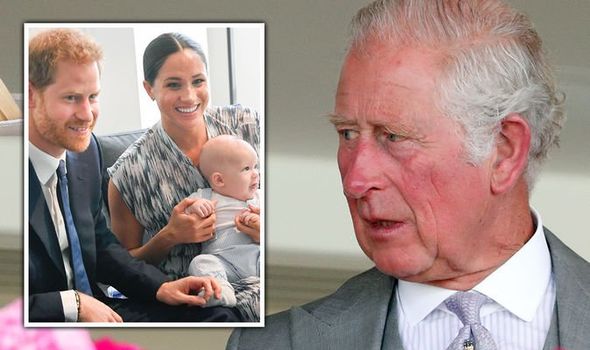 “And they are pretty close in line to the throne if god forbid after Charles William and Kate the three kids were in some sort of terrible accident then Harry is king and Archie is next in line,” she continued.

“Gosh that really would be a disaster you’re close to getting Prince Andrew in that situation,” Jeremy quipped.

“Let’s not bring Prince Andrew into this because then it all goes pear-shaped,” Nina said.

“If Charles wants to slim down the monarchy that’s fine there are all sorts of cousins living in grace and favour that’s all to the good.

“But since the Duke of Edinburgh died and since Harry and Meghan are no longer available to carry out royal duties have you not noticed that Edward and Sophie are suddenly being brought up from the bank vault?”

“Sophie has had a lot of good press I should have realised they brought her out front and centre,” Jeremy added.

“Because they need as many of them as possible to do these roles and Harry and Meghan have stepped back from this role,” Dawn argued.