Richard Bacon gave Good Morning Britain viewers quite an eyeful with their breakfast after flashing his legs in a questionable pair of shorts.

The TV presenter joined Kate Garraway to host the Christmas Eve edition of the ITV programme on Friday and apparently, it wasn’t chilly in the studio.

During a segment to promote GMB’s 1 Million Minutes campaign, Richard emerged from behind the desk to demonstrate how viewers can use the QR code on the screen.

However, he seemed to be half-dressed looking professional on top with a blazer, shirt and tie, but a pair of camouflaged shorts on the bottom.

Richard’s questionable work attire surprisingly wasn’t mentioned in that moment, but he and Kate circled back to it after the ad-break.

‘I thought it was Christmas Day, Kate,’ Richard said of his casual workwear. 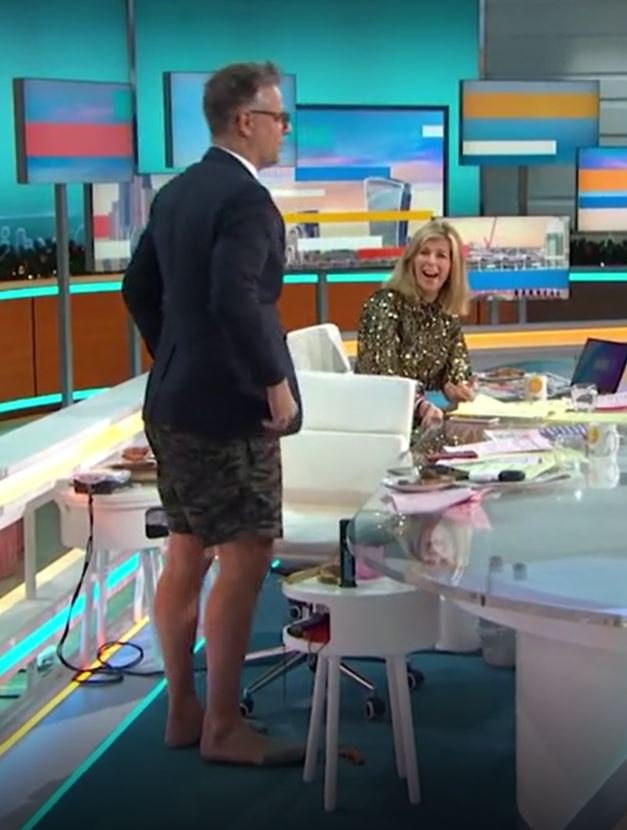 His co-host noted: ‘You don’t even have proper shoes, are they hotel slippers?’

The former Blue Peter presenter then confessed: ‘They are, I’m staying in a hotel this week.’

He then complained: ‘Do you realise how undignified you walk when you’re wearing hotel slippers?’

Richard reassured her: ‘Well, I shall put some trousers on a little bit later.’

‘Hope someone gets richard slippers for xmas,’ another joked.

One confused viewer said: ‘Hang on why is Richard wearing and the slippers too.’

Earlier in the episode, Kate and Richard discussed Meghan Markle and Prince Harry’s Christmas card photo and whether it ‘usurped’ the Queen’s speech image.