The Archie Comics series has been in circulation since the 1940s. Riverdale is the live-action show based on the characters that audiences around the world have come to know and adore.

Some viewers who are unfamiliar with the source material may be surprised to learn that the stars of the show look shockingly similar to the classic comic book drawings. And there are numerous other nods to Archie Comics within the plot. Here are just a few of the details that have translated onto the small screen. 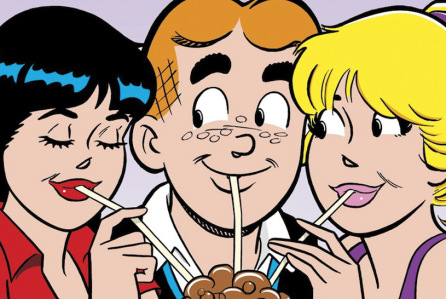 The Archies Band from the comics popped up in ‘Riverdale’

Long before Riverdale premiered on The CW in 2017, millions of fans grew up reading Archie Comics. Red-haired, freckle-faced, kindhearted Archie Andrews is at the center of the narrative in the books. And Riverdale’s Archie portrayer, K.J. Apa, definitely looks the part.

In the comics, the groovy teen, Archie, is the frontman of The Archies band, with classmates Betty Cooper, Veronica Lodge, Forsythe ‘Jughead’ Jones, and Reggie Mantle backing him up. The Archies make an appearance in the Riverdale Season 4 episode, “Wicked Little Town.” But when they perform, there is one huge departure from the comics. Kevin Keller replaces Reggie in the group.

‘Riverdale’ downplays the love triangle from the comics, for now

Between the pages, Archie is at the center of a love triangle. He is torn between friends Betty and Veronica. And when the mood strikes, Cheryl Blossom saunters in to cozy up to the loveable character.

On Riverdale, Archie has had several flings, including one illicit affair with Ms. Grundy, a teacher inspired by the comics. But the show primarily pairs him with Veronica — at least for now.

Betty is currently head-over-heels for Jughead, despite that unplanned lip-lock with Archikins in season 4 of the show. And Cheryl appears to be living in bliss with Toni Topaz. But what will happen after the season 5 time jump into adulthood is anyone’s guess.

Betty, Veronica, and Cheryl echo the comics on screen

The romantic rivalries are compelling, but Betty, Veronica, and Cheryl have more going for them than their dating lives, both in the comics and on the show.

Like her comic counterpart, Riverdale’s overachiever and academic superstar Betty is an avid writer who rocks a slick blonde ponytail. Veronica is a fashionista and heiress with remarkable confidence and a dark, sleek mane. And the savvy rich girl Cheryl has eye-popping red hair and more swagger than she can tote in her designer handbags. Riverdale stays true to these classic characters’ basic descriptions but adds lots of sizzle for TV.

Rounding out the classic Archies crew are Jughead and Reggie. In the comics, Archie’s witty best friend Jughead is rarely found without his trademark beanie and is more interested in chowing down on massive amounts of food than engaging in romantic pursuits. On the other hand, Archie’s frenemy Reggie loves mixing it up with the ladies of Riverdale, including Archie’s on-again-off-again girlfriend Veronica. Riverdale definitely leverages Jughead’s intellect and Reggie’s brawn.

What’s different about Jughead on the show is that he leans more into leading man territory with Betty by his side and the keys to a killer motorcycle in his leather jacket pocket. As for the beanie and the ravenous appetite from the comics, they remain distinct on-screen traits for the Serpent King.

On the show, Reggie has been a rival for Archie in the past, especially when it comes to Veronica’s affection. Despite some of his missteps, the on-screen version of the sable-haired athlete is much more likable than the Reggie in the source material. Plus, he scowls a lot less than the illustrated version of the character. Most importantly, Reggie has proven himself to be a loyal pal who will come through in a pinch.

Riverdale Season 5 premieres on The CW in January, and according to the trailer, the core group will have even more high school drama to wrap up before the time jump. And with any luck, the show will drop even more Archie Comics Easter Eggs in the coming episodes.