Birds of Prey no longer flips the bird in a sanitized edit that was accidentally uploaded to HBO Max.

As first noted by CBR.com and other sites, the R-rated Birds of Prey (and the Fantabulous Emancipation of One Harley Quinn) — which first landed on HBO Max in August 2020 — returned to the streamer after a brief absence this week with numerous, basic cable-friendly edits.

Though listed on its main page as being the original “R” version, the DC movie opens with an advisory saying, “This film has been modified as follows from its original version: it has been edited for content.” Meaning, for example, that all profane language has been dubbed over with family-friendlier verbiage, flashed middle fingers have been digitally multiplied (see screenshot above), and Renee Montoya’s “I SHAVED MY BALLS FOR THIS” T-shirt has been partially blurred. 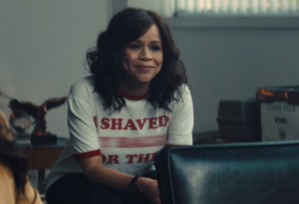 An HBO Max spokesperson confirms for TVLine that the broadcast cable version of Birds of Prey “was mistakenly added to the service,” and that the unedited original version “will be available” — though no timetable for the correction was specified. (As of Saturday morning, the edited version, and only that one, is available for streaming.)

Birds of Prey (and the Fantabulous Emancipation of One Harley Quinn), which after a poor box office debut was more clearly retitled Harley Quinn: Birds of Prey, stars Margot Robbie (as Harley), Jurnee Smollett (as Dinah Lance/Black Canary), Rosie Perez (as Renee) and Mary Elizabeth Winstead (as Helena Bertinelli/Huntress).

As announced in August, a standalone Black Canary movie starring Smollett and from Lovecraft Country/Underground creator Misha Green, is now in the works, to premiere exclusively on HBO Max.