It certainly seemed like too big of a plot twist to just toss into a trailer, but Marvel brass has always enjoyed a bit of misdirection when it comes to its biggest stories. So why not include a major plot point — like that there are “other” Earths and Thanos’ snap has shaken at least one of their inhabitants onto our Earth, played by no less than Jake Gyllenhaal — in an early trailer and let the world run wild thinking about it?

It worked. After the first trailer for “Spider-Man: Far From Home” arrived in early May, fans were set alight with the apparent knowledge — oh-so-casually conveyed by Samuel L. Jackson’s Nick Fury — that a new superhero had arrived on Earth, all the better to battle the oversized monster villains that had destroyed his home and were now bent on taking out Peter Parker’s (Tom Holland) planet.

But anyone with even a casual understanding of the history of said new superhero, the infamous trickster Mysterio, likely didn’t buy it. And despite some valiant attempts from director Jon Watts to obscure the truth in the lead-up to the film’s release (in an exclusive interview with Fandango, he danced around Multiverse queries), the film speaks for itself: There is no Multiverse, and Gyllenhaal’s Mysterio (AKA Quentin Beck) is very much from Peter’s world.

Now that the film is in theaters, Watts is free (well, free-ish, this is still Marvel) to chat about that wild Multiverse twist and how the two-time Spidey director thinks it might come back again. As Watts sagely points out, you kind of can’t blame Peter and his cohorts for believing Mysterio’s lie.

“I think it’s a really intriguing idea and the fact that, in ‘Far From Home,’ everyone just believes it is a testament to how crazy the world has become,” Watts said in a recent interview with IndieWire. “Half the universe disappeared, time travel is possible, so many things happened in ‘Endgame’ that a Multiverse doesn’t even seem that crazy anymore.”

While it remains to be seen if the MCU will tackle the Multiverse question in a non-Mysterio (read: real) way as the MCU pushes into a post-Avengers world, Watts at least isn’t ruling it out. And it doesn’t hurt that the “Far From Home” fakeout has planted the seed of the idea in plenty of moviegoers’ minds.

“Even though it’s bullshit in our movie, I would say what’s exciting about working at Marvel is that nothing is never off the table,” he said.

What Watts and screenwriters Chris McKenna and Erik Sommers did do, however, is dig back into MCU history to craft the wily backstory of Gyllenhaal’s character. Quentin Beck isn’t from another timeline, but he’s certainly felt waylaid in this one.

After revealing the Mysterio’s act is smoke and mirrors — well, drones and insane technology and some big-time lies — “Far From Home” zips merrily back in time to place Mysterio and his team in past pieces of MCU history, thanks to retrofitted flashbacks that now include Mysterio and company. 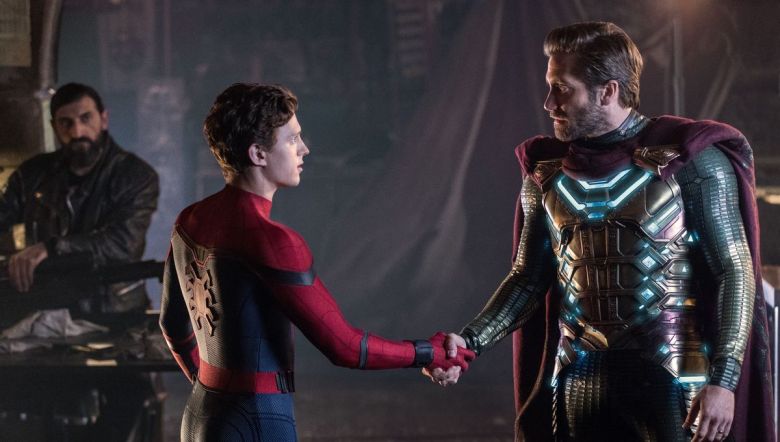 “I think it’s interesting to take all those movies and treat them as the actual history of this world and explore it in a way that you might not always get to do,” Watts said.

Remember when Tony Stark (Robert Downey Jr.) unveiled the holographic technology B.A.R.F. that let him “travel back in time” to see his parents for the last time in “Captain America: Civil War”? Beck built that, and when Stark fired him (and scads of other Stark employees, who now serve as his pissed-off and very smart support team), he went a little nuts.

“I love thinking about the larger world that this story is set in,” he said. “It just made me think about all the other people that worked with Tony Stark along the way, and how are they dealing with this? Whenever something like that happens, whether it be like someone in power dying or a tragedy happens, some people are dealing with it and dealing with the loss, but then you also see people who are being opportunistic and exploiting it.”

He added, “The story is all the fallout from Tony’s death, and I thought that by going back into these other movies and looking at some of the other characters that have been part of Tony’s life, we might be able to show another side of how unscrupulous people deal with a loss or a tragedy like this.”

Asked about how he feels about some of the villains in the early MCU have been forgotten over time — like Jeff Bridges’ once-essential “Iron Man” baddie Obadiah Stane — Watts offered up an example of just why his clever retrofitting works so well in “Far From Home.”

“I like not forgetting,” he said with a laugh.

“Spider-Man: Far From Home” is in theaters now.