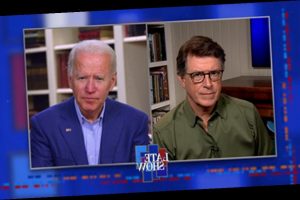 Joe Biden returned to The Late Show with Stephen Colbert tonight in a virtual sit-down to discuss, well, any number of topics. The veteran late-night host and erstwhile VP ended up talking about a subject that many pols would have dodged.

But Biden did not.

In an advance clip (watch it below), Colbert pointed out that “after the Obama-Biden administration took power in 2009, there was a lot of criticism that y’all didn’t investigate some of the activities of the Bush administration, and it was felt that it was time perhaps to move on and heal the country, especially in a time of economic crisis like that.”

That’s a heavy question for a party’s presumptive nominee for president.

But Biden kept his cool. “Look,” he said, as he usually does while calculating how to respond to a query. “Number 1, I will appoint an inspector general to take a look at where every single dollar in the stimulus package and whatever recovery occurs, if it does, between now and January. … I think there’s too many cozy relationships out there.”

After citing some specifics, Biden continued — presumably getting to Point No. 2.

Finishing the thought, Biden said, “I will lay out broad assertions about ‘take a look at the antitrust laws — are they being applied? — take a look at the following things.’ But the idea of saying, ‘I want you to go take a look at’ — uh, I’m not going to name — but somebody in the administration …”

At that point, Colbert interrupted: “Pompeo, I would say — just pick a name out of the hat.”

Biden chuckled and said, “There’s a couple I could pick. But that’s not what I’ll do. That will be for the professionals in the Justice Department.”