Strictly Come Dancing 2021 star AJ Odudu has admitted she ‘cried’ when she found out she and her partner Kai Widdrington had been saved by the public vote, after almost ‘landing face first’ during their routine.

On Saturday evening, TV presenter AJ and Kai, one of the most consistently high-scoring couples on this year’s series on BBC One, ended up at the bottom of the leaderboard, with a score of 28 out of 40 for their Paso Doble.

Nonetheless, they managed to evade being in the bottom two, when the public vote helped them escape the dance-off, which saw Tilly Ramsay and Sara Davies go head to head.

On Tuesday’s edition of It Takes Two, AJ opened up to Rylan Clark-Neal over the ‘relief’ she felt about making it through to Musicals Week, in addition to how ‘moved’ she was by the realisation that the public voted to keep her and Kai in the competition.

After revealing that she experienced a slip on her dress during the routine, Kai told Rylan that while had ‘such a lovely time dancing with Kai’, she was ‘one slip away from landing face first on the judging panel’.

‘I thought, “Uh oh, we’re going here!” So just to be able to recover from that, dig my heels in and just get through the dance, I was genuinely just so relieved at the end,’ she said. 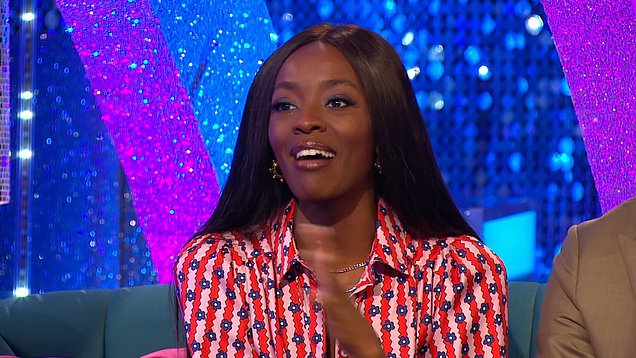 AJ admitted that she fully expected to be in the bottom two, even going so far as to rehearse the moves of the choreography in her head in preparation.

When asked how she felt when she found out she had been saved, the 33-year-old said: ‘I couldn’t believe it. I was moved, I was moved. I had a little cry after and everything because you know, like you said, I was ready to dance again,’ she said.

‘Me and Kai were stood there, I was practising the dance steps in my head and thinking, “Right, don’t be scared of the dress, don’t slip, don’t be scared, you’re gonna go in for it,” do you know what I mean? It’s not over until it’s over sort of thing.’

AJ added she ‘sighed the deepest sigh of relief’ when it was announced that they were safe.

‘I’m just so grateful for another opportunity to learn, because I just love learning how to dance. It’s so much fun!’ she said.

Amid rumours of a romance between AJ and Kai, Strictly’s most recent secret mic segment revealed AJ calling Kai ‘baby’ after their routine, apologising to him after her mishap on the dancefloor.

It Takes Two airs weekdays at 6.30pm on BBC Two.