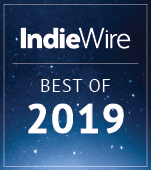 We’ve spent the better part of the last few weeks toasting not only the noteworthy TV accomplishments of this year, but the decade overall. With all the riches that TV has to offer, it can be hard to come up with new ways of saying, “Hey, this thing is good! You should try it if you haven’t already!”

So, at the risk of repeating ourselves, we’ve gathered the top achievements from 2019 on a purely episodic level. Some of these are chapters nested in a much grander arc that require hours of prior viewing to fully appreciate. Others are masterfully executed one-offs that can be enjoyed purely on their own.

Regardless of the reasons for us picking them here, these episodes all underline the idea that TV isn’t just a sea of 6- or 8- or 10- or 12-hour movies. At their best, they can highlight the best of what a show has to offer in the tiniest of packages. They can subvert expectations so thoroughly that they take on a mythology all their own. Whatever the reason, they hold your attention. And sometimes, that’s all you need.

“Barry’s” standout Season 2 episode is one of the better illustration’s of the show’s ethos. On the one hand, it’s cautionary tale. Barry (Bill Hader) has been operating as an assassin for a long time, and his heart’s just not in it. That leads to mistakes, which leads to complications, which could lead to Barry’s ultimate demise. He is, after all, hired to kill people, so if he’s not good at his job, he could end up dead. It’s very serious, very bleak, and very scary stuff. But on the other hand, “ronny/lilly” is an absurdist slapstick masterpiece. Barry starts the episode by trying not to kill someone, and he ends up wreaking more havoc than anyone could’ve imagined. Co-creators Hader and Alec Berg construct a script fueled by usurping expectations, from the reveal that Barry’s mark is a Taekwondo master, to his daughter’s superhuman abilities, to a coincidental ending that would seem impossible, had we not been prepared to believe the unbelievable. “ronny/lily” is as expertly done as Barry’s mission is carelessly assembled. — Ben Travers

For a season that took a closer look at who Sam Fox (Adlon) is outside of her role as a mother, “The Unknown” manages to incorporate a lot of the conflicted elements driving the character’s progress. For one, there’s the artistic satisfaction she finds in challenging material outside the Hollywood system; a satisfaction joyously captured by her trip to New York City to perform an early iteration of a play headed to Broadway. Then there’s her love life, which is complicated by her attraction to Mer (Marsha Thomason) and made more so by an entanglement with the therapist (Matthew Broderick) who’s supposed to be helping her sort things. “The Unknown” throws all these terrifying opportunities at a woman who puts up a guarded, self-sufficient front — she’s a single mom and a working actor in Los Angeles. How would a long-term stay in New York even work? How would a relationship with a woman? What’s outside of Sam’s comfort zone is exactly what she wants and exactly what she’s afraid to embrace. Written by Sarah Gubbins and directed by Adlon (as were all episodes in Season 3), “The Unknown” is a beautiful, subtle, and immensely enjoyable half-hour story that let’s Sam live on her own just long enough to realize she likes it, before sending her scurrying back to safe shores. — BT 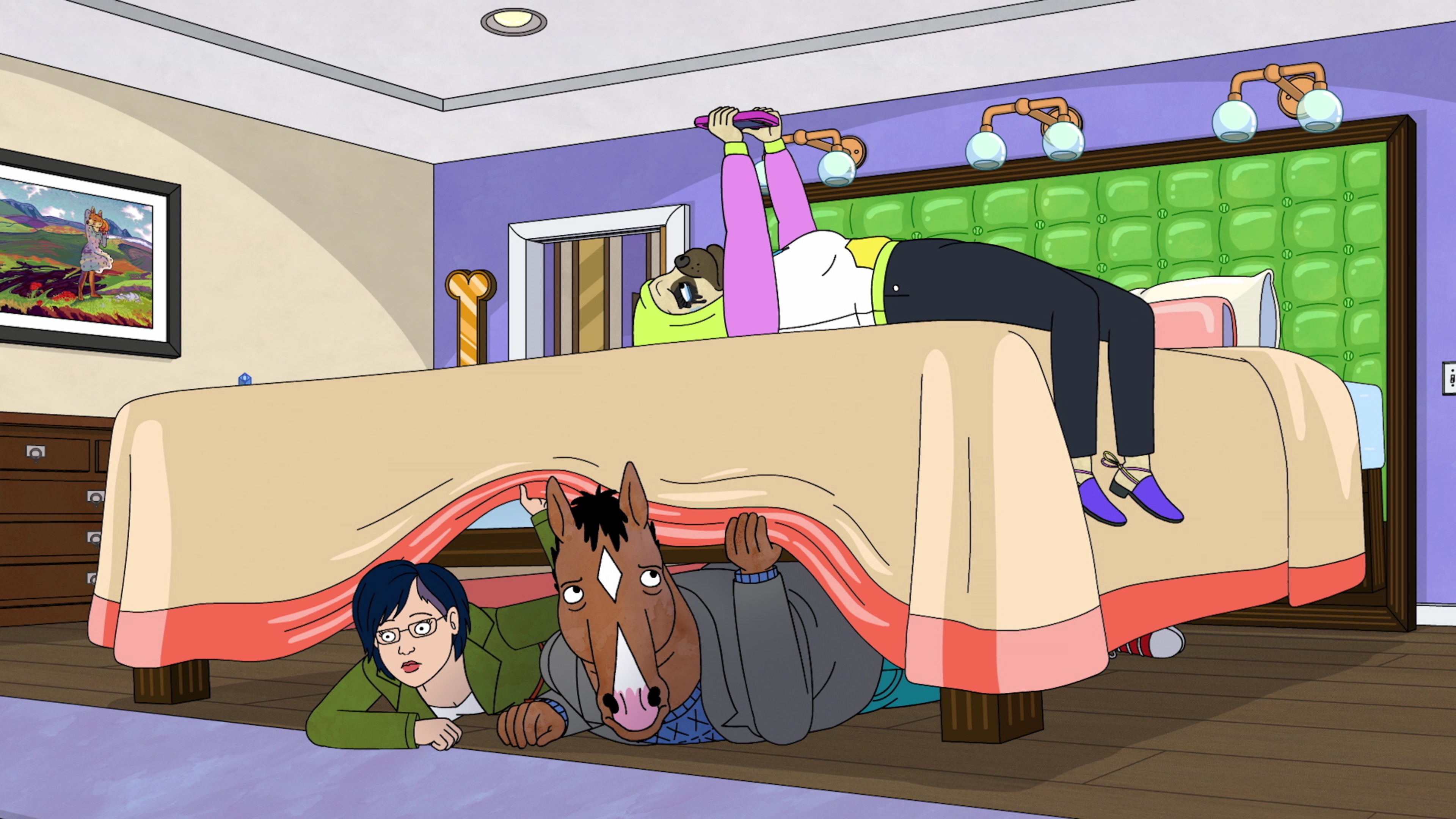 “Surprise!” is, like so many episodes of “BoJack Horseman” before it, a nightmare come to life in the most hilarious fashion possible. The animated equivalent of a door-slamming farce, the episode features a surprise party gone very wrong, as guests are forced to stay hidden in the midst of a relationship-defining blow-out fight between Mr. Peanutbutter and his fiancee Pickles. “BoJack” has always been a blend of what’s best in both animated and live-action television, so an episode which features such pristine use of physical space gags and tension, coupled with an argument where the — extremely effective — emotional climax comes from one party accusing the other of being a very bad dog quickly becomes the platonic ideal of what the show is and always has been. —Libby Hill 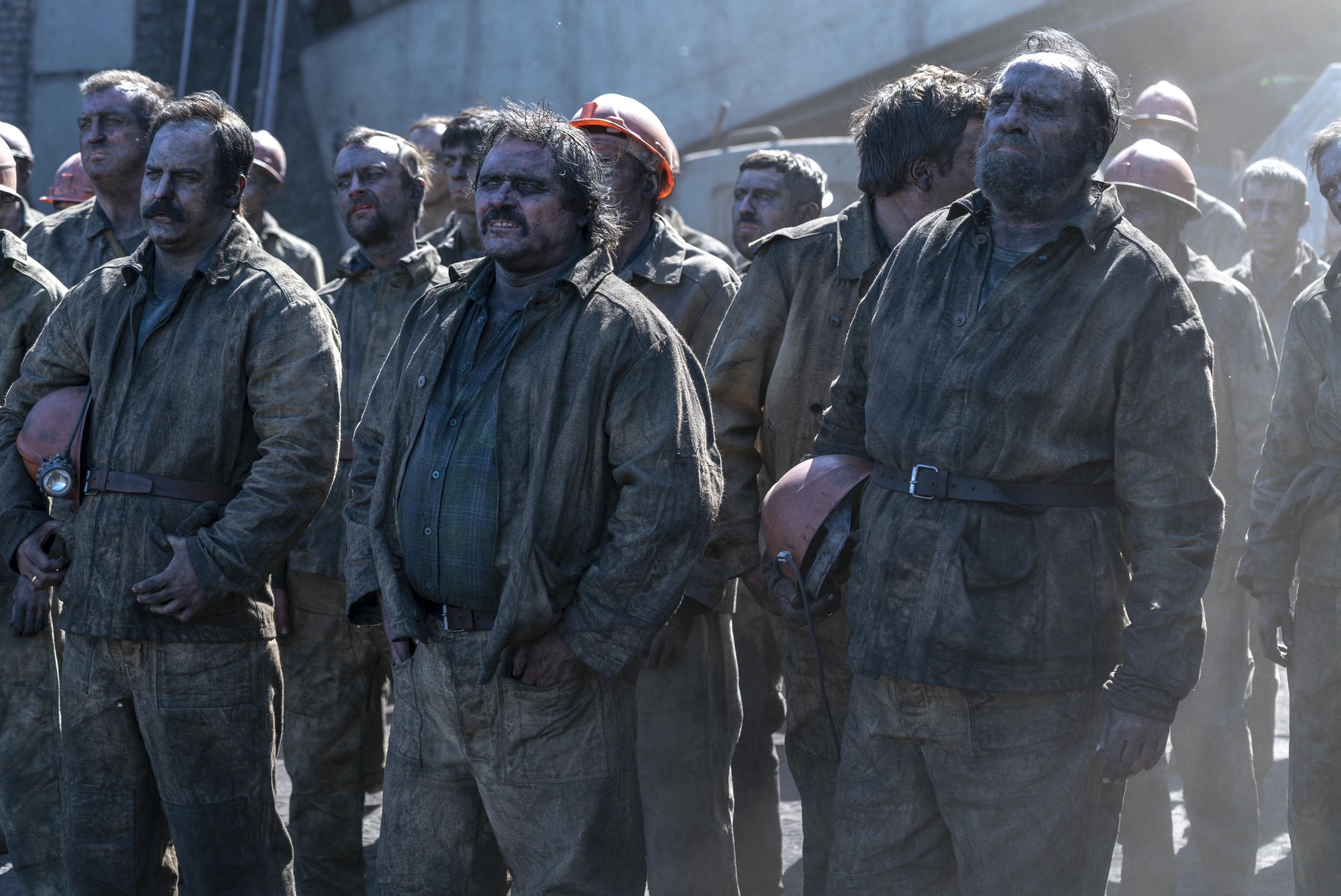 Over its five hours, “Chernobyl” deftly balances the personal journey of its central trio of truth tellers with the greater catastrophe unfolding around them. Though later episodes would reach some unforgettable emotional heights — Legasov’s final testimony, the frenzied rooftop clearing, a litter of puppies found in an abandoned village — this third chapter is the series’ richest kaleidoscope. From an unsuspecting firefighter transforming in front of his lover’s eyes to the grizzled group of miners who sacrifice mightily to save the power plant damage from getting any worse, this hour shows the myriad ways that one disaster rippled through countless lives. Presented with care and solemnity, it lets history speaks through its fictional representatives. —Steve Greene

The third episode of Season 3 of “The Crown” is a microcosm of what the show does so well; it takes an extraordinary historical event and re-tells it through the most personal of lenses. A catastrophic coal mining accident kills 116 children and 28 adults in Wales in 1966, and Queen Elizabeth (Olivia Colman) responds by…doing nothing. She writes in her journal and stares out the window as other members of the royal family visit the scene and return emotionally concussed by the devastation. It’s not the place of the monarch to intervene in such matters, she believes, and she could distract from the rescue efforts. She is, of course, grievously wrong, but her fraught internal battle between what it means to be human and what it means to be the Queen is never again so sharply displayed this season. —Ann Donahue 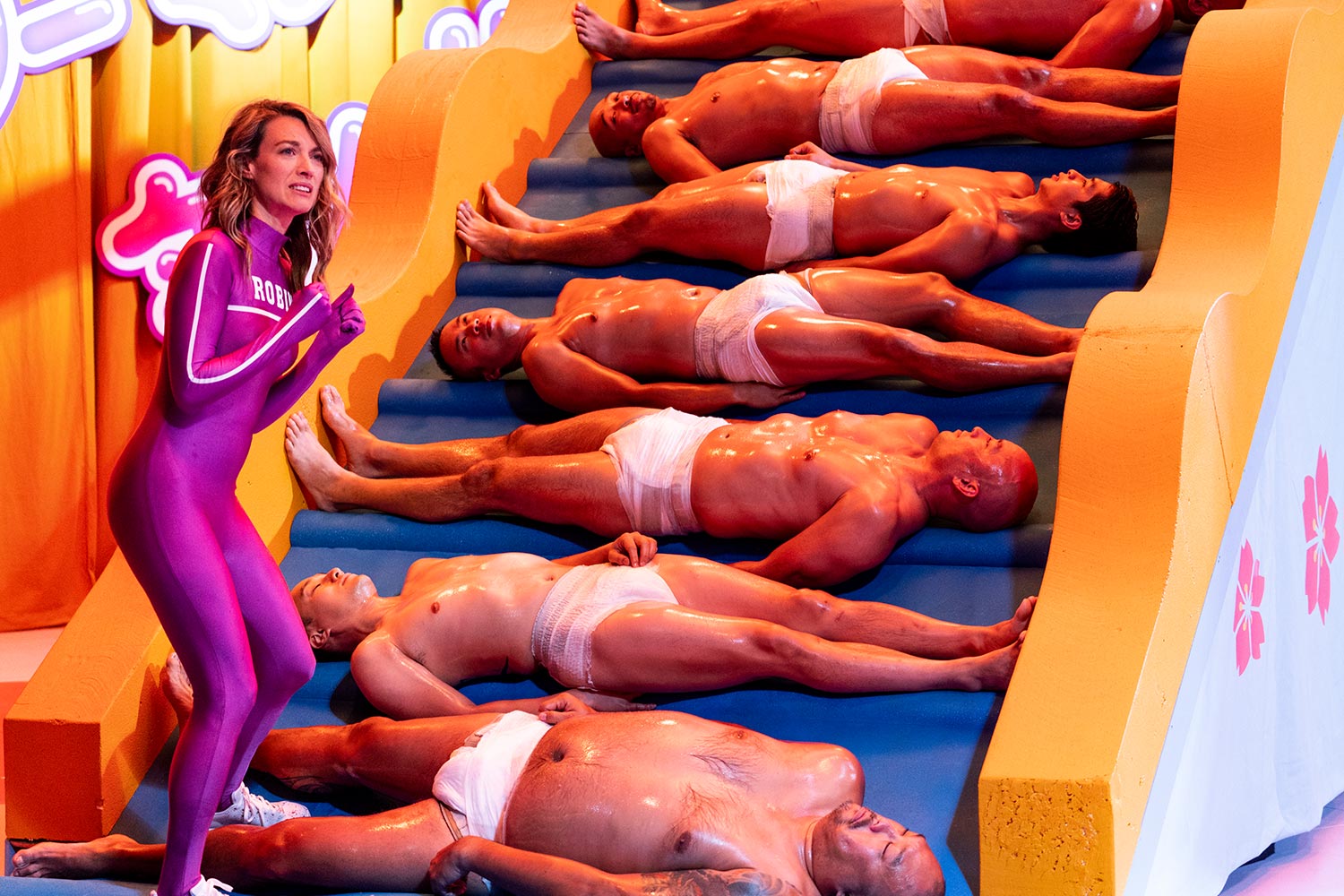 No other show on TV committed more fully than “The Detour.” Over four seasons, the TBS show put the Parker family through unspeakable on-screen trials as the central quartet traversed the country and then the globe. Years of that controlled chaos reached its apex in this truly unhinged series of fake Japanese game show segments that saw parents Nate and Robin effectively trying to win back their daughter. The whole thing is an unhinged series of physical and psychological torments, all done on a candy-colored sound stage as a studio audience looks on in delight. There are feats of forced flexibility, plenty of unfortunate liquid-covered surprise entrants, and a finale that will forever change the way you hear John Denver’s music. What a shining beacon of insanity to help send this hidden gem off into the great TV unknown. —SG 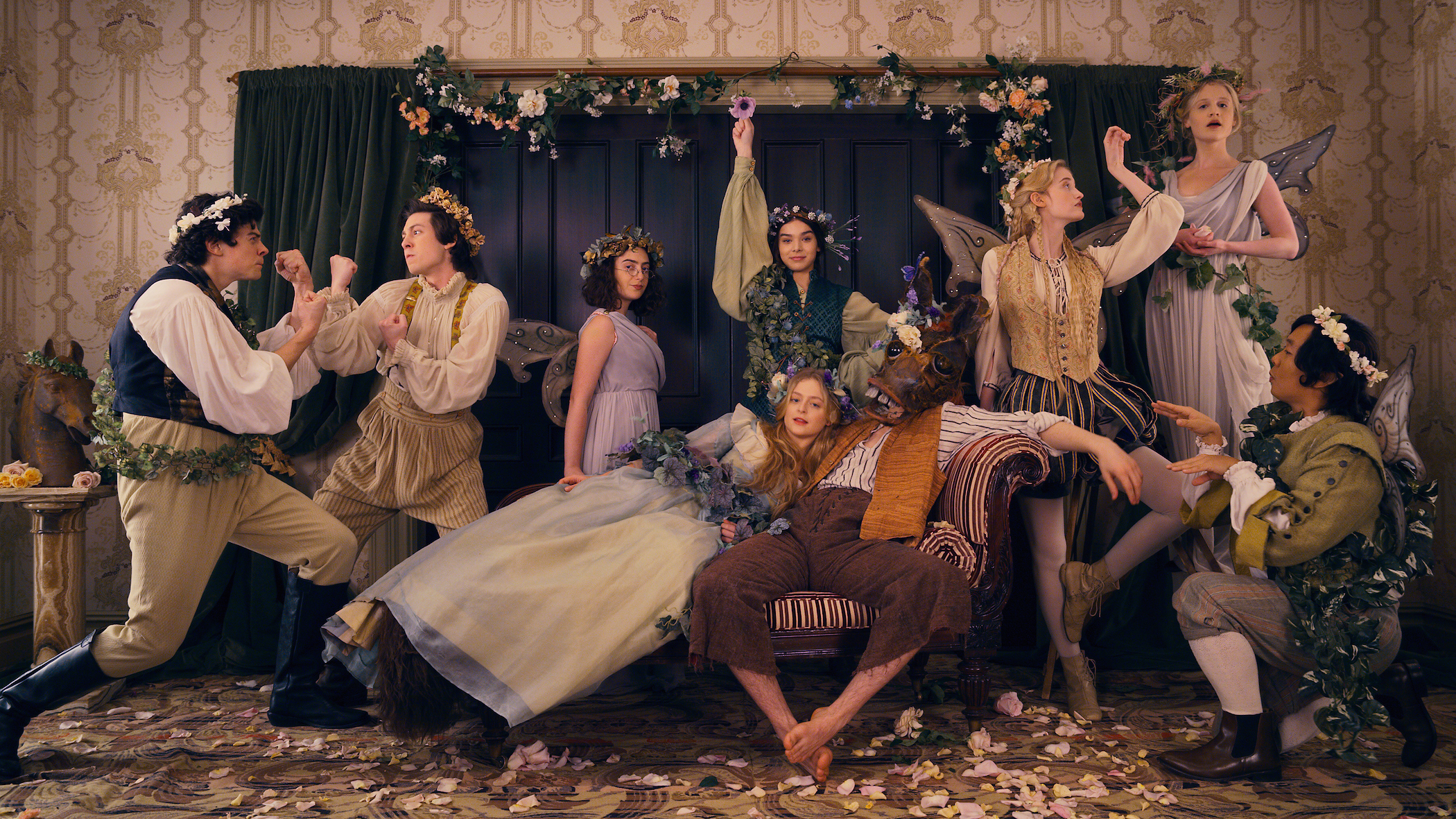 Easily the best series available for viewing upon the launch of Apple TV+, “Dickinson” made its mark on an already excellent year of television with its third episode, “Wild Nights.” In it, Emily Dickinson (Hailee Steinfeld) and her siblings decide to throw a house party while her parents are out of town, a premise for so many of the best teen movies of all time, and a choice that crystallizes the series’ MO of marrying the reality of being a 19th century young woman with a 21st century spin. As Dickinson attempts to balance her secret girlfriend and her family drama and the mean girls at her party and casual drug use and her dang teenage hormones, things get messy and they get real. It’s like, whoa, American poetry legends — they’re just like us! —LH 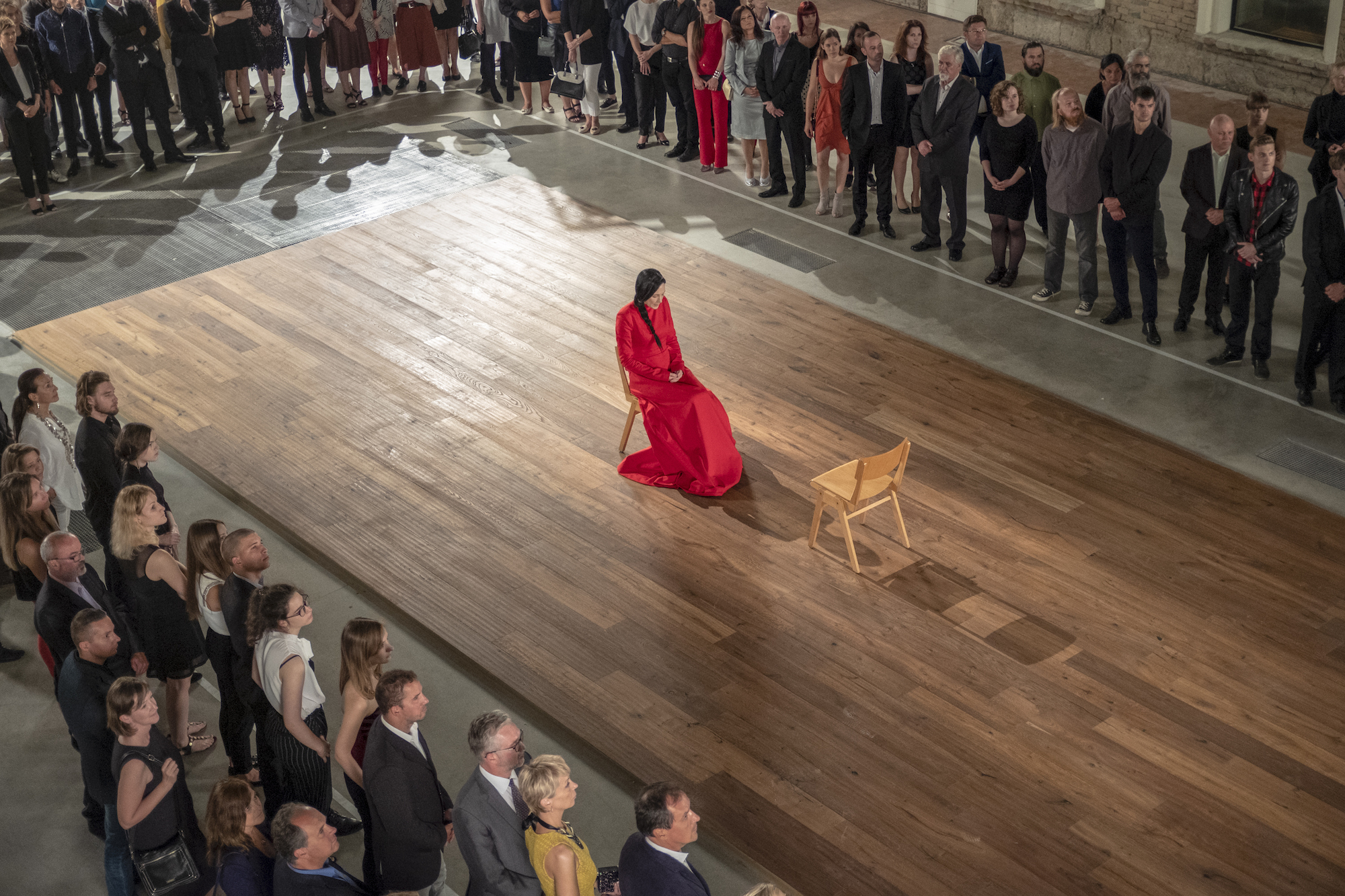 “Documentary Now” — “Waiting for the Artist”

Pick an episode at random from the third season of this IFC gem — perhaps it’s best yet — and you’d probably have one worthy of inclusion on this list. The stellar “Company” riff “Co-Op” has a cast at the height of its powers, the season-ending installment on fictional competitive bowlers is surprisingly poignant, and their two-part “Wild Wild Country” reimagining has a third-act twist built on a joke so good you can almost see Michael Keaton glow as he’s delivering it. But few half hours of TV this year were as mesmerizing as this chapter, taking its cues from the 2012 Matthew Akers doc “Marina Abramović: The Artist is Present.” Anchored by a frighteningly committed Cate Blanchett and bolstered by some impressive location work to bring this fictional performance artist’s “legendary” work to life, it’s a tribute to the source material that’s shocking when faithful and riotously funny any time it veers off the expected script. —SG

First and foremost, you should watch all the episodes of “Fleabag” in order — all 12 episodes over two seasons, each a perfect 25-ish minute amuse bouche of hilarity and heartbreak. But if you’re trying to convince someone to give the show a try, Season 2’s Episode 3 is the standalone wonder that doesn’t need any context from the surrounding episodes in order to enjoy it. Fleabag helps her sister Claire cater a work function, and pratfalls ensue — you get to see Phoebe Waller-Bridge do a mad scramble through the streets of London twice — and Kristen Scott Thomas guest stars as a world-weary corporate raider who is the mistress of a particularly devastating brand of three-martini-drunk advice. It’s the episode where Fleabag turns a corner, both literally and figuratively. —AD

Like “BoJack Horseman” before it — and not just because they both star Alison Brie — “GLOW” is another Netflix series that seems to understand itself more with every passing season. In “Outward Bound,” the series takes its collective of wrestlers, drops them in the middle of the Nevada desert and leaves them to find empathy and catharsis in each other. The show about women’s wrestling that understands that its framing device doesn’t hem it in, but sets them free, allowing the series to build deep and complex relationships between women that don’t all boil down to jealousy or competition. The episode itself digs into some ridiculously heavy issues, including of parallel generational trauma and identity, the vast gap between freedom in men and women, the fear of losing what security we have, and all the ways our lives end up differently from how we imagine they’ll be. It’s beautiful and funny, powerful and moving, and it solidifies the series as one of the few places on TV where it’s safe to be any and every kind of woman. —LH 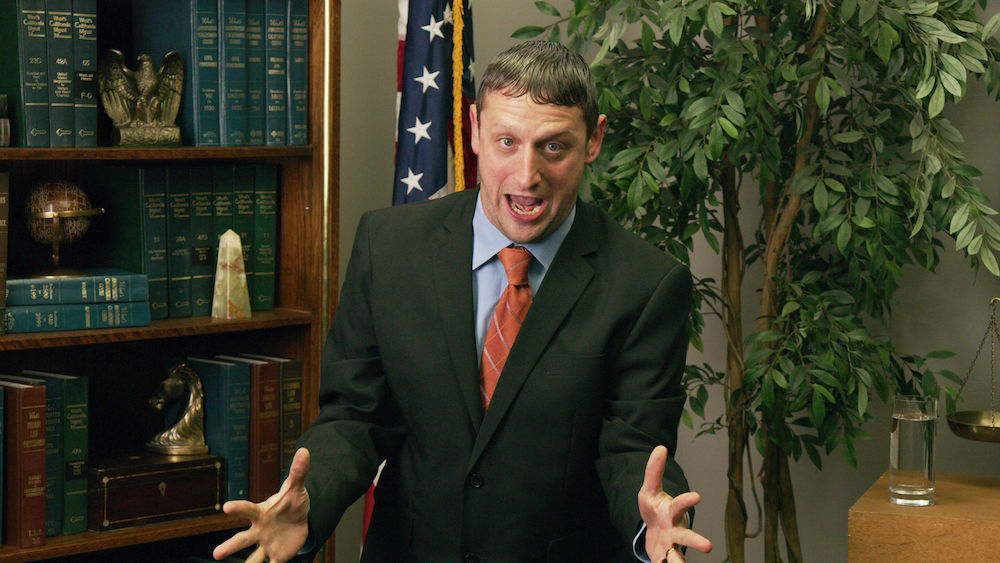 “I Think You Should Leave with Tim Robinson”

“I Think You Should Leave” — “Has This Ever Happened to You?”

Every episode of Netflix’s “I Think You Should Leave with Tim Robinson” is a like a tiny miracle. It’s a caustic series, one that the creators understand can only be ingested in small doses, leading to exquisitely-crafted 17ish-minute episodes designed to give the audience only as much shrieking, brain-clawing hilarity as they can handle. If that sounds unpleasant, it’s because it is, in the best possible way. The first episode of the show’s stellar first season, “Has This Ever Happened To You?,” features five different absurdist sketches, the highlight being a “Baby of the Year” pageant hosted by the inimitable Sam Richardson and boasting the infamous Bart Harley Jarvis, an in memoriam of old babies (or, you know, the elderly), and a sex scandal. It’s impossible to actually describe what makes “I Think You Should Leave” brilliant. Just trust that you should see the show for yourself to discover your new favorite/least favorite series. (There is no in-between.) —LH