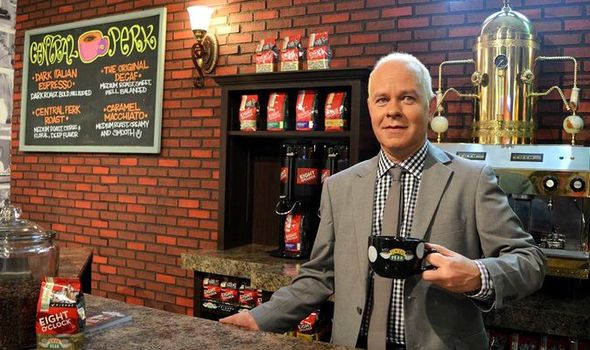 She said the actor, who played Gunther, would be “so missed”.

Tyler’s much-loved character worked in the show’s Central Perk coffee house and had a crush on Aniston’s character Rachel, who also worked there as a waitress in the show’s early seasons.

Her glowing tribute came alongside those from cast members of the hit US sitcom Courteney Cox, David Schwimmer, Matt LeBlanc, Matthew Perry and Lisa Kudrow.

Jennifer posted a photograph of her as Rachel with Gunther as he finally declares his love for her in the last episode of its 10-year run.

She said Friends “would not have been the same” without Tyler, adding: “Thank you for the laughter you brought to the show and to all of our lives. You will be so missed.”

Matt shared a photo of his character Joey chatting to Gunther in Central Perk, writing: “We had a lot of laughs buddy. You will be missed. RIP my friend.”

Courteney, who played Monica, said: “The size of gratitude you showed every day on set is the size of the gratitude I hold for having known you.”

Lisa, who took the part of Phoebe, referenced the NBC show’s theme tune, saying: “Thank you for being there for us all.”

David Schwimmer, who played Ross, thanked the actor for “playing such a wonderful, unforgettable role” and “for being such a big-hearted gentleman”.

Matthew Perry, 52, told his 1.5 million Twitter followers: “We lost a good Friend in James Michael Tyler. Gunther, you will be missed.”

Tyler took up acting while studying geology at university. He joined Friends at its launch in 1994 and stayed until the end, featuring in 150 episodes. The show’s co-creator David Crane said he began as an extra but was given the role of Gunther because he could work the coffee machine.

He added: “As time went on, I think we realised he’s funny – a really good actor.

“We just kept giving him more and more, and when we realised there was a storyline about his secret love for Rachel, it was just the gift that kept on giving. His delivery was impeccable, he was so good that we found ourselves going to him for the punchline for a scene or for a whole episode.”

What is happening where you live? Find out by adding your postcode or visit InYourArea

Tyler was diagnosed with cancer in 2018, but carried on working and in May, made a brief appearance on the Friends Zoom reunion special.

He said: “It was the most memorable 10 years of my life, honestly.

“I could not have imagined just a better experience.All these guys were fantastic and just a joy to work with. It felt very, very special.”

Tyler also starred in two short movies The Gesture And The Word, and Processing which won him best actor awards at film festivals.

He died peacefully at home in Los Angeles on Sunday morning, leaving his second wife, Jennifer Carno, described in a statement by his manager as “the love of his life”.