It’s odd that someone could equate freedom with being surrounded by a rabid throng of adoring fans lining entire city blocks. Yet, in one of the more striking sequences of “The Crown” Season 4, that’s what happens for Lady Diana (Emma Corrin).

The series shows her and Prince Charles’ (Josh O’Connor) 1983 diplomatic journey through Australia, making the argument that the trip managed to burnish her royal credential outside the boundaries of the United Kingdom while bringing a sense of momentary peace to a marriage in turmoil.

The climactic moment of Episode 6’s Australian excursion is that bustling crowd, butting up against police blockades just to get a glimpse of the new international star as she passes by. It not only marks one of the pivotal points in Diana’s season-long arc, it leads to one of the most exciting pieces of music that composer Martin Phipps has written for the show so far.

“Something that [showrunner] Peter Morgan talked to me about a lot early on was was the suppressed power feel. There’s this incredible power, but it’s offstage, rumbling away, and it never quite showed its face right up close,” Phipps said. “I think that’s what he wanted in the music. He wanted this feeling of something with a lid on it, something slightly buttoned up, but with incredible intensity. But for this one moment with Diana, I could undo those buttons and let it let the beast out.”

There’s a buildup in this scene’s score — on the show’s official Season 4 soundtrack, it’s a cue titled “The Diana Effect” — that starts from a kind of musical rumble. The audience follows a rooftop swimmer as they emerge from the water and look down at the staggering assembly on the street many floors below. Knowing that would be the audience’s visual entry point to this moment helped Phipps begin his contributions with an escalation of his own.

“What triggered that idea was that fantastic shot. Julian Jarrold directed Episode 6 and I remember sitting in on a meeting early on. They were talking about a big shot they were going to do over the top of the swimming pool and down the side, which is a great effect. There’s that almost vertigo feeling, lurching down towards into a sort of bear pit of Di-mania below,” Phipps said.

Beginning from that introductory low hum, the piece also was born from conversations with Morgan. Throughout their customary process of assessing demos and refining ideas before bringing in a live orchestra to play, Morgan responded to the idea that “The Diana Effect” would start off as something without an easily identifiable emotion.

“He loved buzzy drone that started off. Excited, but slightly on the edge of being a bit nasty if it goes a bit further. He loved that kind of ambiguousness. He loved playing that really softly through scenes as well. ‘Barely audible droning,’ he would call it. I picked up on that and then built the whole cue, starting with that idea, with that sound,” Phipps said.

One of the challenges of “The Crown” is trying to use the markers of a timeframe without feeling fully locked into them. For a chapter in this history unfolding in the 1980s, Phipps wanted to make something that nodded to the sounds of the decade without straying too far from the overall tone of the show’s established score.

“What I wanted to use from that ’80s synth sound was the brightness, the brashness, the feeling of something new and fresh, which I think very much came out of the ’80s. I didn’t want to start doing pastiches,” Phipps said. “Score should be about the character and what’s going on inside their head. And that can be timeless and that can be placeless. So I would never want to get too bogged down about trying to recreate a sort of perfect ’80s synth sound. But the idea was having something quite pure, something raw and fresh and very unorchestral.”

It’s a little deceptive given the unified, elated crowd, but there’s a kind of gentle rhythmic tug-of-war happening underneath the music’s shimmering surface. The electronic pulse that gives the piece its forward momentum splits and overlaps, almost like the passing handshakes that Diana herself is giving out.

“In a lot of score stuff, you can’t just rely on something having a great funky beat. That’s never going to work. And it’s always going to feel slightly stuck on or incongruous, especially when you start entering a world of a big period drama series,” Phipps said. “You want rhythm, and you want propulsion, but you have to find a slightly oblique way of looking at it. You want to wrong foot the audience just enough with with the cross rhythms, but still allow them to attach onto something so that they can feel that they’re being pushed forward. You don’t want to go too left field and not really know quite where the pulse is.” 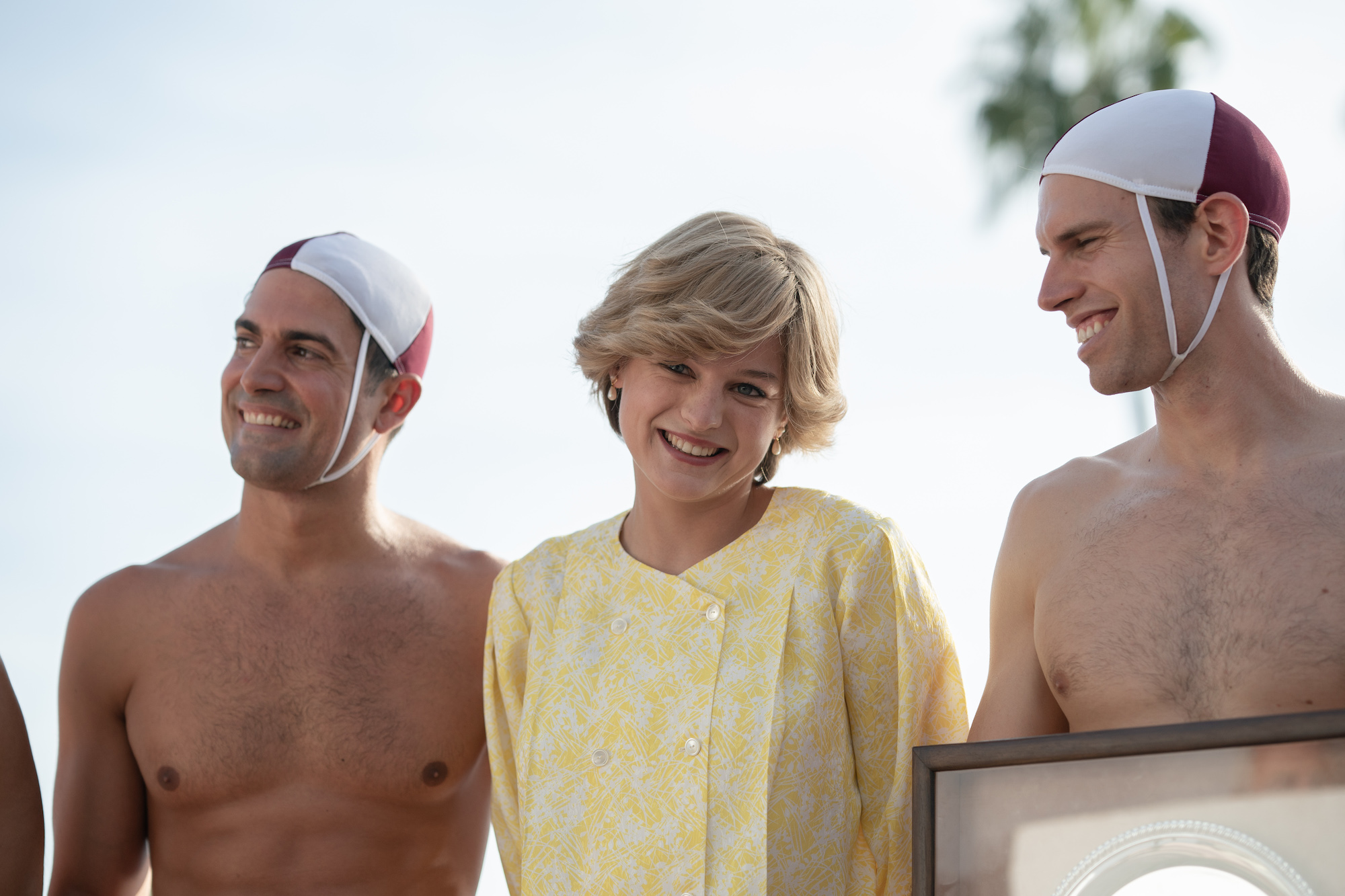 Coupled with the French horns that seem to be announcing her arrival, the other main triumphant part of the score in this sequence is a chorus of voices singing over the adoring crowd. Without context, it sounds closer to what an audience might expect from a wedding scene. After the muted, ominous music that plays underneath Charles and Diana’s ceremony, this outdoor celebration feels like a half-season’s worth of bottled frustration bursting out.

“Voices are very hard to get into score, because they’re very personal, very immediate. It’s like having someone in the room with you. So you have to work them in quite carefully,” Phipps said. “There’s a limit to what I can do soundwise within the the world of the British monarchy. But I love vocals and I will do everything I can to try and get them in there. They’re very touching thing for Diana: her vulnerability, her loneliness, her femininity in this very patriarchal world.”

As much as Diana is in the spotlight in this sequence, the show is still very conscious of Charles’ reaction to everything that’s happening. Phipps made sure to include a subtle nod to how his reaction to the Australia trip lingers on the horizon.

“At the very end, when they start to finally break through the police barriers and mob Diana, you’ll hardly notice it, but there’s a moment when he’s jostled. I sort of cut everything, and it’s just down to a little piano chord just on him,” Phipps said. “We didn’t want to say it too obviously, but that was a nod to the beginning of the downfall from them having a relatively good time for once in their lives. Just a little note to say, ‘Look, here it comes.’”

With as many curveballs as this season brought with it, Phipps might be facing his biggest “Crown” challenge yet. He said that he’s returning as composer for the show’s upcoming two seasons, even as so many of the faces in front of the camera are set to change.

“It’s going to be hard having a whole new cast, just when you’ve settled. Season 4 was so much easier than Season 3. But in the end, it really freshens things and it keeps things alive. You’ve got a whole other box of stuff to play with,” Phipps said. “I was obviously a little nervous that they were going to switch composers again. But now I’m locked in for 5 and 6, which is great. I want to see this one through now.”

“The Crown” Season 4 is available to stream via Netflix.