We spoke to the once (and future?) “Queen of Earth” ahead of the show’s Season 5 premiere 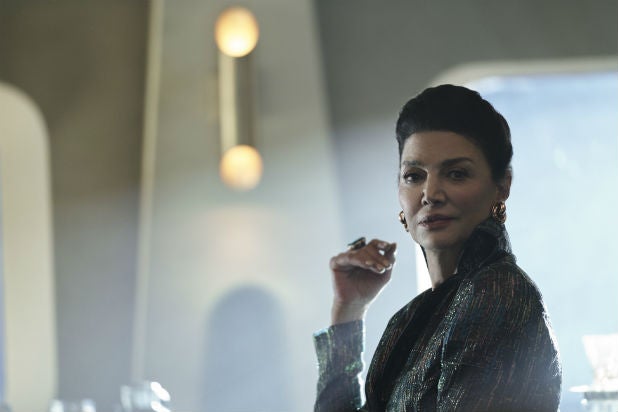 (MILD SPOILERS ahead for the first three episodes of “The Expanse,” Season 5.)

Chrisjen Avasarala, played with profanity-laden glory by the always excellent Shohreh Aghdashloo, has long been one of the prime movers of “The Expanse.” But as we meet her again at the start of Season 5, the former UN Secretary-General is at one of the low points of her career — even if Amos still thinks she’s “Queen of Earth.”

After failing to win a bitter election in Season 4, Chrisjen has been demoted to a minor advisory role heading up the United Nations offices on Luna (the moon to us normies). And though she’s still a high-ranking government official, new Secretary-General Nancy Gao frequently makes it clear Chrisjen is, at best, being tolerated rather than included in the new government.

It’s a long way from the heights of power she enjoyed in the previous season, but the drop in status made even worse because it keeps Chrisjen from being able to take real action just as Belter terrorist, Marco Inaros, is setting in motion some major attacks on the cradle of humanity.

That’s a lot to unpack, and we haven’t even gotten into the jaw-dropping spoilers yet. Fortunately, prior to the launch of “The Expanse” Season 5, we had a chance to talk at length with Aghdashloo, who walked us through her character’s setbacks — along with some interesting insight into how she approaches the role along the way.

As Aghdashloo sees it, regardless of where Chrisjen might be in the hierarchy as we reconnect with her, she has just one over-arching concern — the safety and security of Earth — and that regardless of where she is, she’s always making sure she’s prepared to act on that.

“Everything is like a project to her. If she was about to join a, say, tea party with her friends, she would turn it into a project. Weeks before, she had to make up her mind as to which service she wants to use, whether it’s going to be the Chinese or the UK, you know, China service. So everything is like a project to her,” Aghdashloo told TheWrap. “So if you go to Avasarala at the beginning of her project, or even at the middle of it, we won’t get anything out of this because all she is doing is she is paying attention to what she needs to do. In other words, she becomes one with her project. She has become one with her mission: Earth must come first.”

That mission is tested severely in the third episode of Season 5, when Inaros manages to deal a spectacular blow against Earth, directing an asteroid at it that impacts near South Africa, killing millions. We can report that we were very much surprised by that moment when we watched the episode for the first time but, as Aghdashloo pointed out, Chrisjen absolutely was not. She’s been expecting something like it, or worse, her entire career. If anything, she is annoyed at having been right all along.

“If you recall in Season 1, episode two or three, she’s on the roof gazing at the stars. Her grandson asks her if she’s afraid of the rocks. She says she’s afraid of the people who throw the rocks. So this is in continuation of what she has been afraid of. That’s why she’s not surprised. On the contrary, she’s angry because of the fact that she kept saying this, that this is going to happen and nobody paid attention to her,” Aghdashloo said.

Aghdashloo has absorbed a lot from Chrisjen over the years, she said. “I keep thinking about her, even when I’m not working because I’ve learned so much from this woman, from this character — that along the way, she knows that there are times that she has to let go of the power and just sit back and watch and learn from it. And then, at the right time, just jump in and do her job. She’s a very clever, smart, wise lady. I like her.”