‘The Outsider’ Trailer Promises a Murder-Mystery With Horrifying Consequences 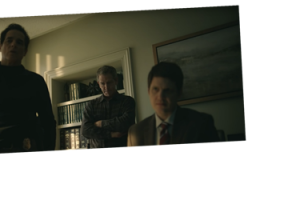 HBO has unveiled the first trailer for HBO’s “The Outsider,” the latest Stephen King horror novel to be adapted for the small screen.

The 10-episode series, which is set to hit HBO January 12, will follow police detective Ralph Anderson (Ben Mendelsohn, who also produced the series) as he investigates the grisly murder of an 11-year-old. Although authorities quickly make an arrest, the police soon discover contradictory evidence, suggesting their prime suspect (Jason Bateman) was in two places at the same time. Though the case appears simple at first, the show’s trailer suggests that events soon take a more sinister — perhaps even supernatural — turn.

Although investigators looking into a child’s murder might seem like typical whodunit crime drama fare, the trailer for HBO’s “The Outsider” makes clear that the drama series will retain King’s signature horror flairs. Mendelsohn’s character might claim he’s just looking for “facts, evidence, [and] dumb cop shit like that,” but it’s clear that his investigation will take more than a few grisly, suitably horrific, twists and turns.

The series’ other executive producers include Richard Price — who also serves as showrunner on the adaptation — Michael Costigan, Marty Bowen, Dennis Lehane, and Jack Bender.

“The Outsider” marks the latest in a string of high-profile adaptions of King’s novels. “Mr. Mercedes” (also produced by Bender), “Castle Rock,” and “The Mist” are among several recent television shows drawing from the master of horror’s original stories, while film adaptations “It,” “It Chapter Two,” and “Gerald’s Game” have also enjoyed successful runs.

Beyond “The Outsider,” King diehards will have plenty of television content to keep them satisfied (and scared) in the near future, as adaptations of “Lisey’s Story” and “The Stand” have already been announced for the Apple TV+ and CBS All Access streaming services, respectively.

Check out the full trailer for “The Outsider” below: