'The Voice': Is Ariana Grande Coming Back for Season 22?

Ariana Grande’s first season as a coach on The Voice has officially come to an end. The bubbly pop star made her mark on season 21 as she settled right in alongside fellow coaches Kelly Clarkson, Blake Shelton, and John Legend. Even though her team didn’t make it to the finale, Grande formed some beautiful friendships with her co-stars and Team Ariana artists and seemed to have a great time on set. Will the “7 Rings” singer take her place in the coach’s chair once again for The Voice Season 22?

Grande announced in March 2021 that she would replace coach Nick Jonas in the newest season. When season 21 rolled around in September, the pop sensation’s involvement brought a new wave of interest in NBC’s singing competition from fans across the country.

The Voice Season 21 had its challenging moments for Grande — she often broke out in tears during eliminations — but the singer loved the experience nonetheless.

“It’s such wholesome, inspiring television, and I love seeing the different voices and watching so many people start careers for themselves. It’s a beautiful, amazing thing,” she told Entertainment Tonight in September.

Grande’s fellow coaches admired her dedication to her team. Clarkson even said the former Nickelodeon star was unlike any other coach in The Voice history.

“In all my seasons, I’ve never heard a coach talk about vocal health as much,” the country singer told Jimmy Fallon.

Will Ariana Grande be on ‘The Voice’ Season 22? 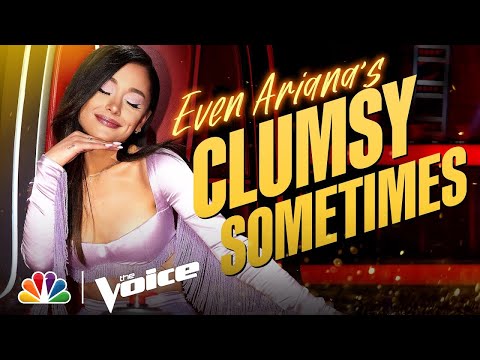 At the time of this writing, neither Grande nor NBC have confirmed the singer’s return as a coach for The Voice Season 22. However, Grande did express interest in working with her fellow coaches again. She gushed about her first season in an interview with E! News’ Daily Pop.

“I think getting to spend time with everyone was such a treat because we became friends,” Grande said. “I feel like I made real friends, and I can’t wait to work together on whatever is next. … I’m running back as soon as possible. If it’s this group, I’ll be so happy.”

Likewise, Legend, Clarkson, and Shelton loved welcoming Grande into the family. Legend said they had “so much fun” with her on set, while Clarkson said the four coaches had fantastic chemistry.

It’s not uncommon for The Voice coaches to step away during certain seasons to accommodate their schedules. Nick Jonas, for example, coached seasons 18 and 20, taking a hiatus during season 19. Grande recently announced her casting as Glinda in an upcoming Wicked movie, which might take up a decent chunk of her time. However, the filming schedule for the film is not yet clear. Anything can happen with The Voice at this point.

Unfortunately, The Voice fans will have to wait a bit longer than usual to see if Grande returns. After several years of airing two seasons per cycle, NBC decided in 2021 to cut back to only one in the fall. That means season 22 will likely arrive as early as September 2022.

“The Voice remains one of the most popular shows on television, and we want to keep it that way,” said NBCUniversal Television and Streaming’s Chariman of Entertainment Networks Frances Berwick, per Deadline. “We want to eventize this iconic series. We think The Voice will be on NBC for a very long time to come, and we believe the best way to protect the brand, while also superserving fans is to produce one amazing cycle this year.”

Stay tuned to Showbiz Cheat Sheet for updates on Ariana Grande and The Voice Season 22.