This week in the wide, wide world of trailers: Our first looks at a feline T-Swift, a poledancing J-Lo and Tom Cruise back in the cockpit; clips of the upcoming doc on Motown and HBO’s next big blockbuster-TV fantasy bet; Brad Pitt gives us his best pensive face, Kirsten Dunst is out for payback, Chris Evans  and Toni Collette and Merit Wever are two detectives hot on the trail of a serial rapist; and a highlight from this year’s Sundance drops a hallucinogenic teaser. All this plus a Pennywise for your thoughts. Check ’em out.

Ad Astra
Is it us, or is there a distinct Terrence Malick vibe happening in this James Gray/Brad Pitt sci-fi collaboration? The second official trailer goes heavy on the voiceover and the strings, with Pitt’s astronaut trying to contact his long-lost father (Tommy Lee Jones) somewhere in the vast cosmos. Ruth Negga makes a slinky cameo, Liv Tyler shows up for a weepy moment and Donald Sutherland does what he does best, i.e. suggest a creepy authority figure who may know more than he’s letting on. It’s inner turmoil in outer space. Sep. 20th.

Cats
We remember hearing someone who had been in heavy combat talk about what it was like to be a soldier in a war. He said he couldn’t accurately describe the sensation; it was something you had to experience first-hand. That’s kind of how we feel about the trailer for this upcoming movie of Andrew Lloyd Webber’s popular Broadway musical. Words can’t really do it justice. It looks…very, very unique. And it answers the age-old question of: What kind of cats would Taylor Swift, Idris Elba and Dame Judi Dench be if they could be cats? Now we know. Dear God in the heavens, we most certainly do know. Dec. 20th. 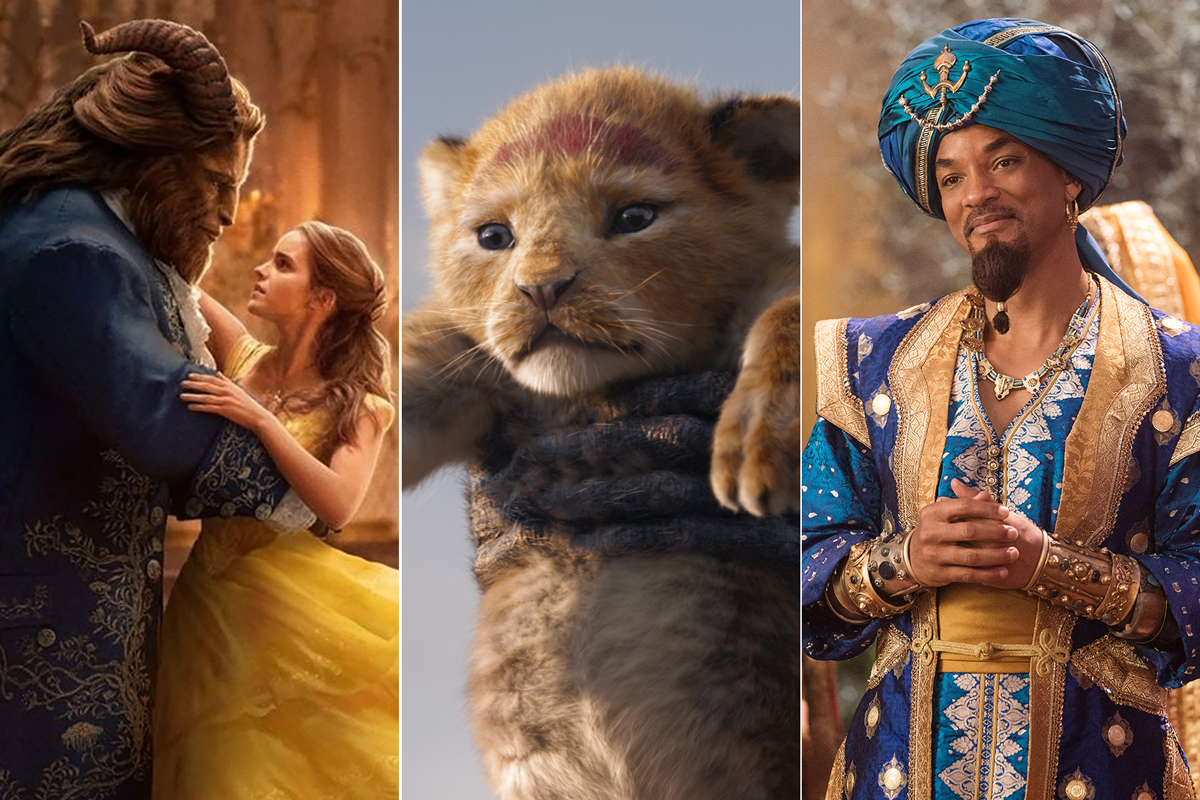 What Do We Want From 'The Lion King' and Disney's Live-Action Remakes?

Dear White People, Season 3
“Is this some Black Mirror shit,” asks one character in this trailer for the social satire’s upcoming episodes. (We’d like to congratulate Netflix on some primo cross-branding of their shows.) Should you have missed the meta-reference, this clip stops being coy a few flash-cuts later: “If everyone stayed exactly the same, life would be tedious and predictable … like the third season of a Netflix show.” Jokes! Seriously, if you haven’t been watching Justin Simien’s TV adaptation of his own 2014 movie, now’s the time to catch up. The parody of a makeover show in which a fashion-forward type helps a MAGA type get rid of Klan robes should be enough to make you start tuning in. Aug. 2nd.

Don’t Let Go
Ah, the old go-back-in-time-to-stop-a-murder chestnut! Except this time, David Oyelowo’s everyman — who’s lost his relatives in a grisly homicide — is the one in the future, and he’s getting a phone call from his dead niece (Storm Reid) and she is still in the pre-killing past and he has to use his knowledge of what happened to prevent it happening and…[breathes into paper bag to keep from hyperventilating]. Considering that this is from the good folks at Blumhouse, we imagine this will get more bloody and horrifying before it gets resolved. Aug. 30th.

His Dark Materials, Season 1
Back when Game of Thrones was still heading into its last lap, everyone was wondering what HBO was going to do for a possible epic-fantasy, fan-baiting, world-building follow-up. Cue a lavish production of Philip Pullman’s books about multiverses and a repressive religious force known as the Magisterium, complete with zeppelins, child heroes, attack monkeys, armored polar bears and a name cast (James McAvoy, Ruth Wilson, Lin-Manuel Miranda, The Wire‘s Clarke Peters). This could be the steampunk answer to their — and your — prayers. Fall 2019, a.k.a. coming very soon.

Hittsville: The Making of Motown
Most folks know the story of how Berry Gordy turned a Detroit-based record company into a cultural force to be reckoned with — but what, you think we’re not going to watch a documentary about the label that gave us Smokey, Stevie, the Supremes, the Temptations, Marvin Gaye and many, many more? You’re insane. Bring on the archival clips, the vintage performance footage, the interviews with living legends and all of those timeless tracks. Aug. 24th.

Hustlers
Who better to give those Wall Street fatcats the ol’ what-for than a bunch of exotic dancers? Jennifer Lopez, Constance Wu and Cardi B. are part of a crew of strippers who use the financial-industry bros’ appetites against them in order to liberate these gentlemen of their riches, one swiped credit card at a time. It’s based on Jessica Pressler’s article about a real-life scam involving dancers at Scores. We’re guessing they’ll be makin’ lots of money moves. Sep. 13th.

Jay and Silent Bob Reboot
You’re reading this correctly, people. Kevin Smith’s stoner duo return, hoping to stop a reboot of the original comic-book movie based on their lives. A ton of celebrities drop in for cameos. You are either super-stoked for this or you genuinely DGAF x 1000. Oct. 15th.

The King’s Man
So that secret British organization known as “Kingsman,” the one in the movies where Taron Egerton gets the junior James Bond treatment and Colin Firth engages in all that violent mayhem with an umbrella — like, what’s it’s origin story? This prequel entry in the franchise goes back to the very beginning, with Ralph Fiennes and Djimon Hounsou running around WWI trenches and training young Harris Dickinson in the art of protecting Western civilization from megalomaniacs. If you liked the first two movies but wish they had more old-timey set pieces, ice-climbing and Gemma Arterton shooting a pistol into the camera, woo boy, are you in luck. Feb. 14, 2020.

The Kitchen
Hell’s Kitchen, New York, ’78. Three men get picked up for a liquor-store robbery and get thrown in the pen. Three wives — Melissa McCarthy, Tiffany Haddish and Elisabeth Moss — are left without partners or providers. The local kingpin who was supposed to look out for them … well, he doesn’t seem too keen on keeping the weekly payments coming. So the trio start doing their own dirty work — and lo, a new criminal empire in Horror City is born. Aug. 9th.

Monos
A outta-left-field sensation at this year’s Sundance, this Colombian movie about teenage guerilla rebels holding an American woman (Julianne Nicholson) hostage is, in a word, stunning. Its oddball, hallucinogenic images and jungle-madness vibe earned it comparisons to Herzog’s work and Apocalypse Now at the fest (where it walked away with a jury prize), but Alejandro Landes’ tale of Latin American political warfare is a singular mix of beauty and horror — and this trailer gives you a good sense of what’s in store. Mark your calendars: Sep 13th.

On Becoming a God in Central Florida
How do you get even with the multi-level marketing scheme that drove your loved ones into the poorhouse? Easy: You take it down from the inside. Kirsten Dunst is the Sunshine State resident out for revenge; a sleazed-up Alexander Skarsgård is one of the organization’s top promoters; Silence of the Lambs‘ Buffalo Bill himself, Ted Levine, is the charismatic founder at the top of the pyramid. This is Showtime’s big prestige-TV project for the fall, and damned if you don’t have our attention after this trailer. Aug. 25th.

Playing With Fire
“Nothing can prepare these elite firefighters for their most challenging job yet: babysitting.” Cue tough-guy smoke jumpers getting sassed by kids and lots o’ slapstick. We love the respective Johns — Cena and Leguizamo — and Keegan-Michael Key, but: whatever we did to deserve this, we promise to never, ever do it again. Nov. 8th.

The Red Sea Diving Report
Ethiopia, 1979: There’s a genocide in progress and the government has decided to authorize a plan for Mossad agents to smuggle refugees to Israel. The mission will be led by Captain Amer… — our bad, Chris Evans — and involves using a nondescript looking resort as a base of operations. In the mood for a based-on-a-true-story tale of danger and derring-do, with a cast that also includes Ben Kingsley, Michael K. Williams, Alessandro Nivola, Game of Thrones Michael Huisman and Haley Bennett? This Netflix movie may be the ticket. July 31st.

Top Gun: Maverick
Hey everybody Maverick’s back! And somehow, despite the many years that have passed since the Reagan era, he still has a need for speed! If the trailer is any indication, this decades-in-the-making sequel will feature Jon Hamm looking ridiculously handsome in a uniform, Ed Harris being crusty, shirtlessness, our hero once again racing a jet on his motorcycle, lady pilots, lots of yelling, another barroom sing-along (because of course!) and some moody looks off into the sunset. Cruise’s gonna Cruise. June 26th, 2020.

Unbelievable
So is this Netflix drama going to be the big breakout for Kaitlyn Dever that Booksmart was supposed to be? The actor plays a young woman who reports a rape; because her story “doesn’t add up” according to the cops, the whole thing is dismissed. Cue investigators Toni Collette and Merritt Wever looking into a remarkably similar incident months later, and discovering that there may be a serial rapist on the loose — and Dever’s case may be involved. This could be the alt-season of True Detective we’ve been waiting for! Sep. 13th.