‘Tuca and Bertie,’ Stellar Animation, and Learning to Treat TV as a Single-Screen Experience (Again)

Even in their truncated form (post-Netflix), the opening credits of “Tuca & Bertie” are an eye-grabbing embodiment of what makes the Adult Swim series such a unique, all-consuming pleasure. Front and center are the two bird-stars and best friends, Tuca (voiced by Tiffany Haddish) and Bertie (Ali Wong), whose relatable, winsome pursuit of their passions fills out each episode. Soon enough, Bertie’s bird-boyfriend Speckle (Steven Yeun) dances onscreen, a welcome third-wheel who’s playfully pushed aside so the main duo can fly off to their own drive-in movie date. (Though, to be clear, these bird-people can’t fly — as explained by Whoopi Goldberg’s narrator in the Season 2 finale, only 5 percent of bird people can take to the air, and our trio falls in the flightless majority.)

Those choice moments make up the Season 3 credits in their entirety, just as those three characters make up the joyful core of “Tuca & Bertie.” But it’s not just who and what that make Lisa Hanawalt’s animated lead-in so engaging — it’s how. Tuca and Bertie aren’t just dropped into frame; they’re strutting directly at you. The actors’ names aren’t just listed; they burst from the birds themselves, forming bouncy letters that spell “Tiffany Haddish” and “Ali Wong,” complete with green and red accents for emphasis. Speckle’s introduction isn’t a dance, so much as a smashing arrival — hands flailing, eyes bulging, and arms spread wide, all while the exuberant theme songs illustrates how the rhythm will indeed get you. By the time the title card appears, you’re alert enough to look over the full image in front of you: Tuca and Bertie perched on a branch, Speckle sitting nearby, and enough curvy bird butts to bring good luck to a small village.

Before each episode officially begins, “Tuca and Bertie” demands engagement in a way plenty of today’s television shows take for granted, and even fewer actually earn.

Nowadays, second-screen viewing is practically the default. As of 2019, 88 percent of Americans use a second digital device while watching TV, and while there are good reasons to do so — a commercial break, downtime during sports, pressing pause to look up that one guy who was in that one thing but you just can’t remember his name — it can also become a bad habit. As someone who watches far too much TV for a living, I’ve clocked myself scrolling through Twitter while catching up on a show, or over-texting while an anticipated episode keeps chugging along without me.

Part of this is a personal problem. Over-stimulation, dwindling attention spans, or trying to do too many things at once can all create distractions. But plenty of TV is equally to blame. The content glut of the last few decades has led to bloated episodes, seasons, and series. Even if you like parts of those shows, it’s almost instinctive to sense the extraneous material, which sends you reaching for something more exciting. TV, like a lot of scripted entertainment, has also become more plot-driven, with a priority put on understanding what happens instead of delivering a richer, emotionally complex, even polysemantic experience. Sometimes trying to solve a puzzle or pick up on Easter eggs can keep your eyes glued to the screen. Other times those beats are so telegraphed you can spot them while still ignoring the rest of the show.

Television, as it’s often said, is a writer’s medium, and plenty of folks are perfectly happy to half-watch, half-listen to exposition-heavy TV. Letting the latest “Law & Order” or “The Conners” play out while doing the dishes is its own kind of comfort — a familiar distraction from cherished characters is all that’s required, and that’s OK. But if you treat all TV that way, whether on purpose or in practice, then you’ll be missing out. Worse still, it often feels like there’s more TV made for a second screen than the first.

Not so with “Tuca & Bertie.” As has been the case from the start, Hanawalt’s comedy executes so well, on so many levels, you just know that looking away means missing a creative delight. In “Leveling Up,” the Season 3 premiere (now available on HBO Max), it all starts with a sound story. Tuca has a new job (she’s a duck tour guide on the newly flooded streets of Bird Town), and she’s managed to hold onto it longer than any of her previous gigs. Soon, the sustained success starts to morph into inescapable pressure, and she has to fall back on Bertie to steer her through uncharted waters. Meanwhile, Bertie is stressed, too. She’s started selling her own pastries online, but all the site management and paperwork are getting in the way of her true love: baking. Can she work through these beginning-small-business-owner blues, or is she better suited for a position entirely dedicated to tasty treats? (Oh, and Speckle? He’s got a fancy party to prep for, lending the episode’s climax the elevated stakes glamour so reliably provides.) 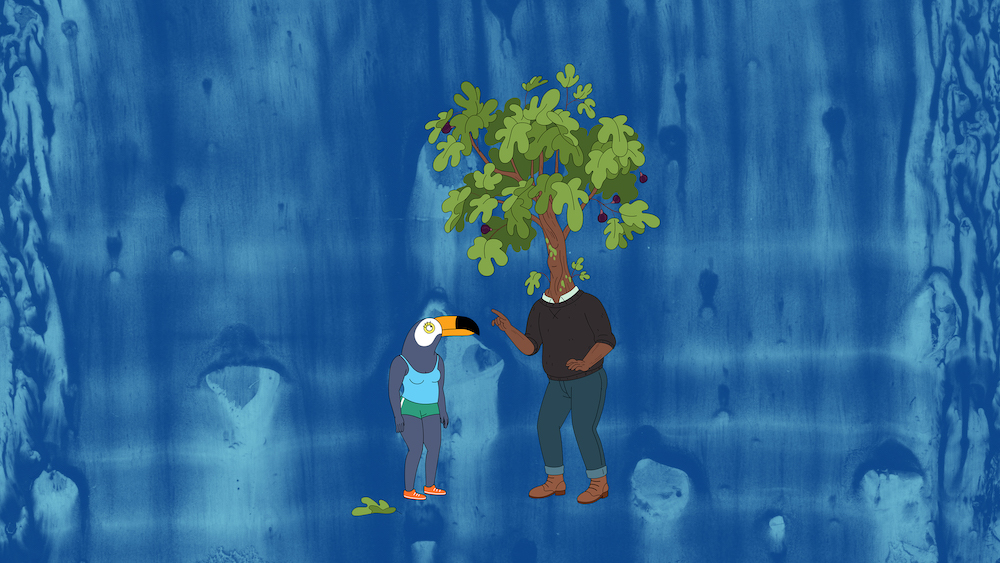 “Tuca & Bertie” excels at exploring internal dilemmas with wit and nuance. Tuca’s fear of success is rooted in her identity, in how much she loves her carefree lifestyle and how much she fears becoming boring or stuck. And Bertie’s question isn’t in isolation; she sees her best friend and boyfriend thriving and wonders if she’s on the right path. But appreciating their emotional arcs is only one layer in the show’s souffle. There’s still the jokes, the performances, the pacing, and the design — broad and specific — to keep you invested.

One of the first voices you hear is Matthew Rhys, playing Tuca’s new boyfriend Figgy, a tree-person who’s head over heels for his bird-girlfriend. Rhys’ Welsh intonation is enough spark to light up any scene, but one enticement — even a great one — is never enough. When Tuca lays on the charm, the fig fruits hanging from his branches turn scarlet. That pairs (pears?) nicely with our first glimpse at Bertie’s online bakery, Sweet Beak, where her web browser has drop-down tabs for “Fly-le,” “Henstory,” and “Help (For Birds).” A quick glance at her apartment, and you’ll spot a worm serving as a key hook and the fan-favorite framed photo of a gawking Speckle (which is soon utilized as a visual gag when he mistakes it for a mirror).

“Tuca and Bertie” is bursting with attributes as identifiable as they are admirable, but its pleasures run even deeper than what the casual fan may pick up. Aaron Long, this season’s supervising director, recently took to Twitter to share notes he gave to the show’s storyboard artists. These reference points make it clear how thoroughly “Tuca & Bertie” embodies its creators’ clever and human sensibilities, whether it’s how to pose characters for various expressions or making sure they actually eat the food they’re holding. Heads turn to look at stuff, not just eyes, and bird-people dance in tailored styles befitting their individual identities.

All of these choices make for a richer story — and make it harder to look away. In the premiere, Tuca steals a sandwich off Bertie’s plate, not just by reaching over and snatching it, but by bouncing on the couch to send the snack skyward before tossing it into her smiling gullet. You can even see the food moving down her esophagus! Could everyone appreciate the scene without noticing all that? Sure. But does all that playful movement make the show that much more enjoyable for being there? Absolutely!

Before “Tuca,” Hanawalt was a production designer and producer on “BoJack Horseman,” where her artistic ingenuity helped shape one of the most visually enriched TV shows ever made. Its creator, Raphael Bob-Waksberg, is also an executive producer and writer on “Tuca and Bertie,” while moving animation forward with the intoxicating Prime Video series, “Undone.” But they’re not alone in using animation to maximize their story’s impact. 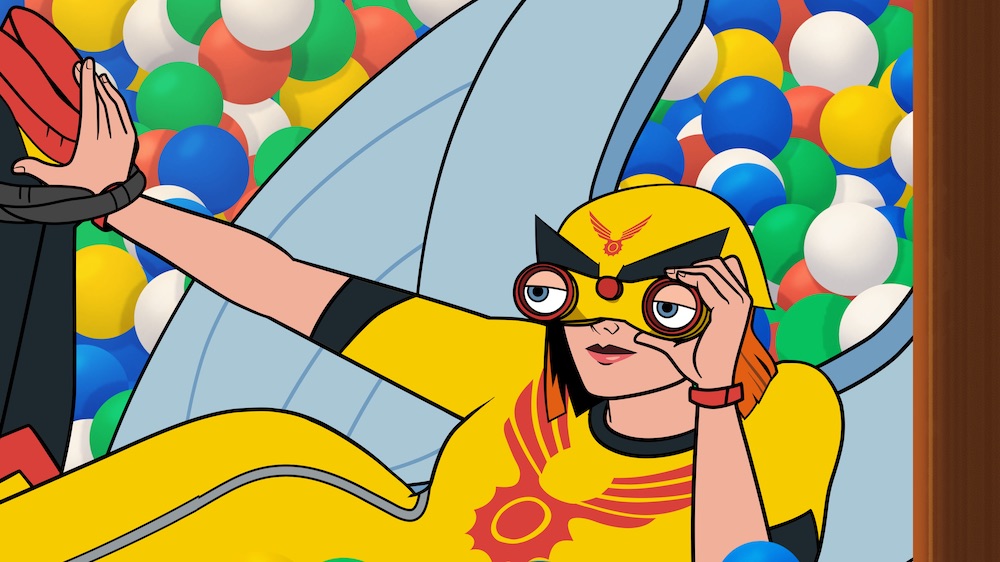 Despite churning out 22 episodes a year, “Bob’s Burgers” has offered a lavish landscape of visual humor to match the Belchers’ endearing story. At a very basic level, episodes have charmed fans for more than a decade with their oft-unspoken Burger of the Day puns, as well as the ever-shifting name of the business next door. Colors are at-once childlike and perfectly suited for Bob and Linda’s grown-up adventures. Creator Loren Bouchard’s consistent experimentation with style and genre may have peaked with this year’s ambitious motion picture, “The Bob’s Burgers Movie,” which not only goes full musical, but crafts practical choreography to match its grounded, low-key draw — what Bouchard calls “silly good dancing.” Like the show has done in various ways over 12 seasons, the routines still deliver the spectacle demanded by cinema, while keeping the tone of a family adventure.

“Birdgirl,” which airs new episodes on Adult Swim a half-hour before “Tuca & Bertie,” relies on speed in a way that requires a watchful eye. In addition to sharp design work and sterling voice performances (Kether Donohue of “You’re the Worst” fame is a scene-stealer as the titular heroine’s secretary, Gillian), executive producers Erik Richter and Christina Miller instill each half-hour with a chaotic structure that’s twists and turns reveal plenty of surprising thrills for those paying attention. Instead of filling the background with revealing details, the show relies on rapidity to compliment the bizarre nature of a workplace superhero saga. (Birdgirl’s day job is CEO of a major, mysterious corporation.) It works well, progressing from its predecessor’s peculiar origins (“Harvey Birdman”) without abandoning its charms.

With total control over every facet of every image, animation is a medium long-suited for audience immersion. Cartoons were made to entertain and educate children. The burgeoning field of adult animation naturally has to push things further, even if many shows fall back on shock factors rather than pushing each part of the envelope. We’ve seen the medium evolve its practice dating back to “The Simpsons,” “Looney Tunes,” and beyond, even as TV’s ticking production clock put extra pressure on animators. Plenty of live-action fare holds itself to equally high standards, and anyone able to look away during a new episode of “Better Call Saul,” “Hacks,” “Barry,” “The Righteous Gemstones,” “Severance,” or “Abbott Elementary” clearly has an unhealthy addiction to their phone. But as the age of too much TV draws to a close, it’s worth remembering all the facets that make great TV worth watching — really watching.