The film by Kim A. Snyder is a needed reminder that issues don’t go away just because something else is getting today’s headlines 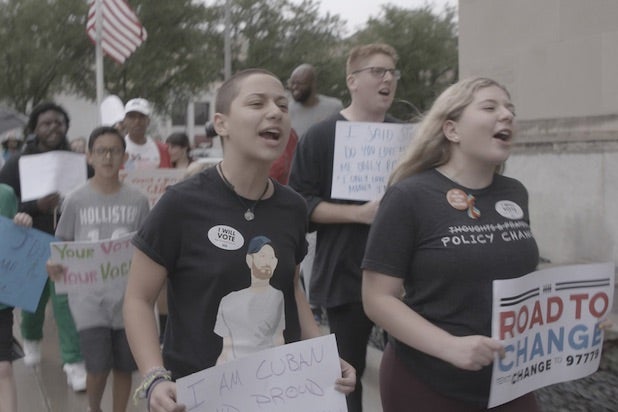 The past few weeks have seen a deluge of documentaries that were pushed into theaters or onto streaming services in advance of the election, because their filmmakers wanted to get the message out before voters headed to the polls. Those include the voting-suppression doc “All In: The Price of Democracy,” the Obama-focused film “The Way I See It,” the COVID chronicle “Totally Under Control” and the Pope Francis profile “Francesco” – and now, you can add Kim A. Snyder’s “Us Kids,” which is being made available for free from Oct. 30 through election day via Alamo Drafthouse Virtual Cinema.

The strange thing about “Us Kids” is that it’s a movie with contemporary urgency but also a time capsule of sorts. It feels like a time capsule not because the issue it addresses, gun violence, is no longer vital – it’s because in our accelerated media and political culture, there’s always a new scandal or crisis to make us forget about what happened last week. And in that sense, “Us Kids” is a needed reminder that issues don’t go away just because something else is getting today’s headlines.

The film goes back about two and a half years, to when 17 teenagers were killed and another 17 injured in a mass shooting at the Marjory Stoneman Douglas High School in Parkland, Florida in February 2018. In the aftermath of those deaths, other students at the school started a campaign for gun-control legislation that galvanized national attention and seemed as if it might change things and break the NRA’s stranglehold on many politicians.

In a way, the students succeeded in changing the usual post-shooting agenda, which over the years has generally and sadly amounted to shock/thoughts and prayers/failed legislation/repeat. But while their efforts had an effect on the 2018 midterm elections, when dozens of NRA-backed candidates lost, it’s hard to sustain that kind of momentum when the world is in turmoil and the political system seems broken.

This year alone brought a global pandemic, an economic slump, social justice protests sweeping the country and an election in the most divided, partisan and potentially explosive climate in recent memory. And in this climate, 2018 feels as if it was a long time ago, and the issue of guns, so important in the midterm elections, somehow feels less urgent, or at least less at the forefront.

“Us Kids” would like to change that. Snyder made a previous movie in the aftermath of a school shooting, 2016’s “Newtown,” and she returns to that area with a focus on a handful of the Parkland students in the nine months after that shooting.

The film sticks with those teenagers as they launch a students’ march on Washington in March of 2018, as they do countless television interviews (“we were being passed around like an STD at Florida State University,” says one), as they mount a cross-country bus tour that summer and as they try to live their normal lives when that’s almost impossible.

“It’s hard to trust anyone these days, considering that a kid I barely f—ing knew tried to kill me,” Parkland student Sam Fuentes says early in the film, and that PTSD clearly haunts everyone in the film, mixed with some survivors’ guilt and, by the end of the film, spokespersons’ guilt as they wonder why it’s fallen to them to carry the message.

The answer, probably, is that the kids had an impact where adults’ efforts went nowhere, time after time. But “Us Kids” makes it clear that it’s not easy to be the voice of your generation on a hotly contested issue like gun control: David Hogg, in many ways the leader of the Parkland group, gets death threats and is pilloried in conservative media by people like Laura Ingraham and Alex Jones.

Hogg is the smooth, personable face of the movement and Emma Gonzalez its most passionate voice – but Fuentes is the central figure in the movie, a deeply scarred young woman who can’t shake the terror that has followed her since the shooting. “Before all this, we were normal-ass kids doing normal-ass things,” she says – and it’s obvious she’d rather be back there than willing herself to stand behind podiums wondering if someone in the audience is going to shoot her.

At times, the film reminds you that they’re just kids, albeit kids who have chosen to take on a very mature role. Those unguarded moments are in many ways the heart of the film, because they’re the ones we haven’t seen before; “Us Kids” is a sprawling film that tries to cover a lot and sometimes feels diffuse as it does, but it cuts deepest when it gets closest to home.

In a way, though, it also feels curiously detached from the present day, even as it concludes with the students urging other young people to vote. The knowledge that this vital issue has been overshadowed in the chaos of the current day makes the last two years feel like an eternity – and when one of the students proclaims at a rally, “You know we are going to win!” it’s just not as uplifting as it might have been in the moment.

“Us Kids” doesn’t really move past that 2018 campaign, but the film deserves to be more than a time capsule of those long-ago days. At a time when Donald Trump mentions “your Second Amendment” in every rally and far-right groups have announced plans to show up armed at polling places, these kids deserve to be heard as much as ever.