Home » TV & Movies » WandaVision Season 1 release date and cast latest: When is it coming out?

WandaVision Season 1 release date and cast latest: When is it coming out?

While the coronavirus pandemic has caused Marvel to push back all its movies, resulting in 2020 being the first year in over a decade without an MCU movie, there is still something coming in 2020.

There is no official date set for WandaVision, the first Disney+ MCU television series set within the movie universe. However, it is rumored to be hitting during the holidays.

Here is everything we know so far about WandaVision Season 1.

This article provides everything that is known about WandaVision Season 1 and all related news. As such, this article will be updated over time with news, rumors, and analysis. Meanwhile, let’s dig down into what is known so far.

Release date latest: When does WandaVision Season 1 come out?

The rumored release date for WandaVidsion Season 1 was December 2020, but it might hit screens sooner than that.

According to the source code pulled from the Disney+ landing page for WandaVision, the release date was revealed as November 27, 2020, which means that is the day the code is set to make the series go live. 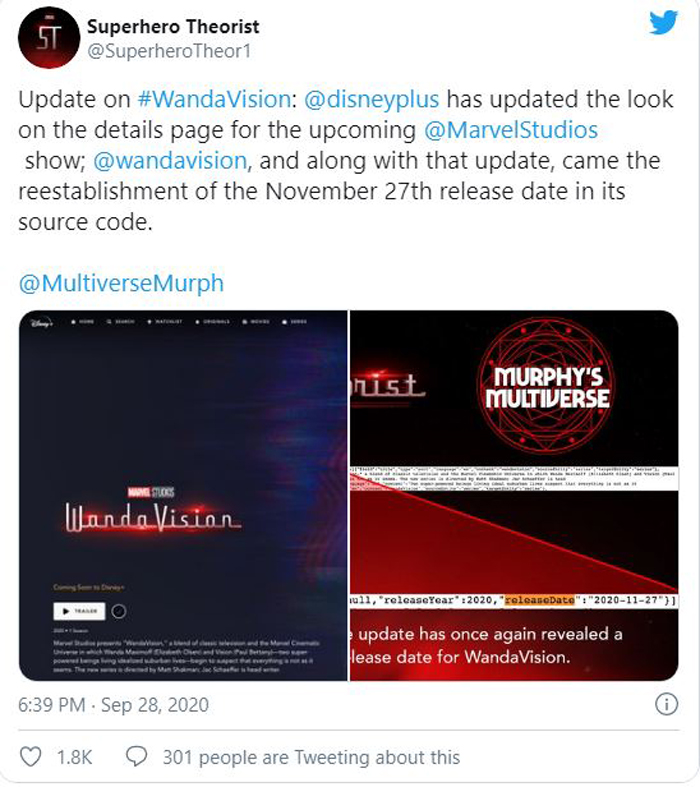 There have been no official comments by Marvel or Disney+ about the release date.

Disney+ released its WandaVision trailer in September. Here is the trailer, and following it, we can break down what we saw.

First, there is a huge blending of the look of several classic television series in the trailer with Wanda and Vision living the happy domestic life that might be expected from someone who only knows domestic bliss based on watching television.

The shows homaged here include The Dick Van Dyke Show (the living room), Leave it to Beaver (Wanda’s outfits), Bewitched (the nosy neighbor and the witch in hiding), The Brady Bunch (the staircase and design of the house), Roseanne (the kitchen), and Full House (the later parts where she is wearing flannel and has the kids).

However, things get weird when Vision flies into a part of the city and faces a car with the “nosy neighbor” named Agnes in the trailer subtitles. She then said that he is dead.

There is then a quick shot of Scarlet Witch using her powers, and then a blast sends a woman flying out of the town where the government has set up shop, proving that Wanda has created this town and has control there.

The two lead stars of the series are Elizabeth Olsen as Wanda (The Scarlet Witch) and Paul Bettany as The Vision.

Also listed in the cast is Kat Dennings as Darcy Lewis (Jane Foster’s friend from the Thor movies), Kathryn Hahn as Agnes, Randall Park as Jimmy Woo (the government agent from Ant-Man and the Wasp), and Teyonah Parris as Monica Rambeau.

Here is the official synopsis for WandaVision:

Marvel Studios presents “WandaVision,” a blend of classic television and the Marvel Cinematic Universe in which Wanda Maximoff (Elizabeth Olsen) and Vision (Paul Bettany) – two super-powered beings living idealized suburban lives – begin to suspect that everything is not as it seems. The new series is directed by Matt Shakman; Jac Schaeffer is head writer.

With that out of the way, here are some theories about what we can expect from this first Disney+ MCU series.

First up, there is the character of Agnes. She is almost certainly Agatha Harkness, the witch who was the governess of both Wanda’s children in the comics and Franklin Richards when he was a baby (Reed Richards and Invisible Woman’s kids).

Now, this leads to more speculation.

Wanda and Vision have kids in this TV series, as the trailer shows — but how? In the comics, Wanda created these children to be her and Vision’s children. However, they were not fully her creation, and when she lost them, Agatha Harkness wiped her mind of them.

These kids returned in other bodies and became two of the Young Avengers’ founders in Speed and Wiccan. Their disappearance also caused Wanda to lose her grip on reality and mess up the entire world.

Could that happen here? There is already the fact that WandaVision will lead to one of the future Marvel movies in Doctor Strange and the Multiverse of Madness.

The fun theory here is that Wanda will open a portal that brings in other characters from other worlds. That is how Jamie Foxx is returning as Electro in Spider-Man 3 and could introduce both the X-Men and Fantastic Four into the MCU.

The next connection here is shown in the cast listing. The woman blasted out of the town is Monica Rambeau. MCU fans know her as the little girl from Captain Marvel.

She is now grown up, and the theory is she is now working for S.W.O.R.D., an organization like S.H.I.E.L.D. that protects Earth from alien threats. This could also be where Nick Fury was at the end of Spider-Man: Far From Home.

Most of this is speculation, but that is the fun of these mysterious upcoming MCU movies and shows.

Disney+ has yet to officially announce when WandaVision Season 1 will premiere.