Home » Was EastEnders' big fire week a return to form?

Was EastEnders' big fire week a return to form? 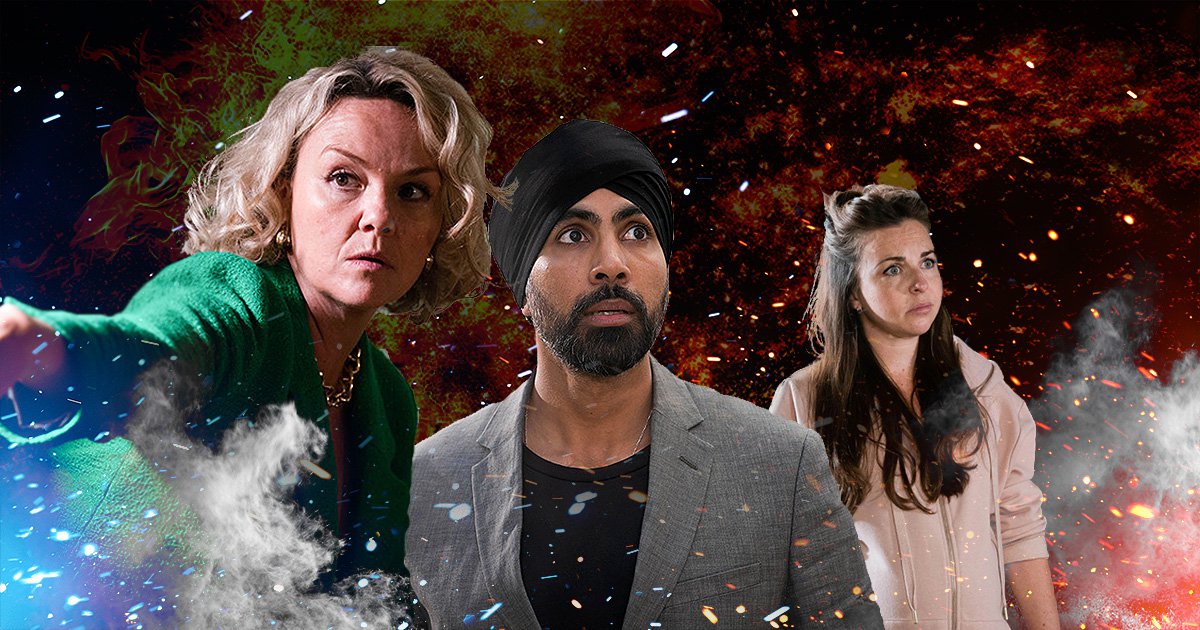 If there’s one thing I hope all EastEnders fans can agree on, it’s that Jack Branning is a truly terrible police officer.

I really wouldn’t bother calling on him to solve any crime. On Monday, he was with a panting and wailing Linda for about 20 minutes and he still didn’t believe she was in labour.

When her waters broke, I half expected him to start searching for a hidden bottle of Evian in her maternity dress. If Gray walked through the Square wearing a sandwich board with ‘I killed Chantelle, Tina and Kush’ written on it, Jack would just laugh and say, ‘Yeah, pull the other one, mate.’

Now, speaking of the swivel-eyed solicitor, he was marking the one-year anniversary of killing of his wife Chantelle by deciding not to let some other poor soul perish. In this case, a coughing Kheerat, who Gray dragged from a burning No 55 Victoria Road to the sound of Florence and the Machine’s Shake it Out.

Why we had music accompanying this rescue is anyone’s guess. Perhaps it was Winston playing a record on his market stall? But for Gray, it was a rare moment of heroism in a week that saw him morph from a horrible person into a very-slightly-less-horrible person who now has added daddy issues.

Janine has grown, too. Having spent her first couple of episodes issuing acidic putdowns as though she’s some kind of Joan Rivers tribute act, we saw that she does at least have the odd fleeting maternal instinct.

Yes, she essentially started the fire, but she wasn’t about to let Scarlett and Tommy die on her watch. Though she did, I notice, step over Phil Mitchell’s unconscious form rather than offer him any help. Mind you, Phil is coated with more Teflon than that saucepan he was cooking with. And, sure enough, he was the first one out of the inferno, dressed head to foot in black and looking like a smoke-damaged supporter of Oswald Mosley.

Meanwhile, Jean, aka Pablo Escobar in a floral-print cagoule, had been nicked and was taking part in a Line of Duty-style interrogation scene, which saw her give three “no comments” before collapsing. She also managed to put Ruby in the frame for drug dealing – not that we have any sympathy for that conniving so-and-so.

Ruby was last seen being rejected by Martin before getting carted off by the cops and will now hopefully cross paths in prison with Stacey, who has threatened to kill her with her bare hands. Which, admittedly, probably wasn’t the best thing to yell at full volume in earshot of all the guards.

For light relief, we had Tiffany and Dotty having a catfight in the gym. Because, in soapland, women assaulting each other is always played for laughs. We had it the other week on Emmerdale, too, when Mandy and Nicola rough-housed for what felt like half an hour. It’s a weird state of affairs, right? Soaps are forever telling us that violence is never the answer to our problems. But when it’s a couple of girls with a grievance, then it’s merely fun “feisty” behaviour.

The big issue for EastEnders, though, is whether all this drama of the past five days has done enough to set the soap back on track.

Currently languishing behind Coronation Street and Emmerdale in the ratings, it was in definite need of rejuvenation. But, to be honest, it still feels as though there’s work to be done. What we witnessed was like a Greatest Hits album with hardly any bonus tracks. We had a comeback, a fire, the unconventional birthing partner for someone in labour, a couple of police arrests, a paternity wrangle, some child endangerment and a serial killer wrestling with his conscience. All repackaged and gifted to us like they were something new.

In some cases, it was near impossible to ignore the echoes of past plotlines. Gray and Kheerat could easily have been Trevor Morgan and Tom Banks. Tommy’s fall from the upstairs window was very similar to Mickey dropping Summer while the Millers’ house burned. And Jack acting as Linda’s emergency doula had echoes of Phil doing the same job for Kim not so long ago.

I realise there are only a finite number of stories in this world to tell, but the trick is to present them with enough twists and surprises as to make them feel fresh. Not just with new characters standing in for old.

There is still potential here, obviously. Dana’s dad Harvey could be revealed to a right-wing extremist, for instance? Or maybe Rocky has a secret vampy wife who turns up and makes trouble for him and Kathy? Have Gray be driven mad by his guilt as he starts to see visions of Chantelle wherever he goes? Or go for broke and have Phil discover that he has an adamantium shell like Wolverine, which explains why he’s able to survive every single Walford disaster…

But the last thing any of us need are déjà vu doof doofs. After all, classic episodes air each lunchtime on Drama for those who want to relive the past.

When it’s at its best, EastEnders provokes and unsettles as much as it entertains. And currently, there’s just this nagging feeling that the show is serving up reheated versions of former glories rather than shocking us with something genuinely thought-provoking and – more importantly – new.

EastEnders continues Monday September 20 at 8:05pm on BBC One.