“Welcome to Wrexham” is maybe the closest that a sports documentary has come to a chicken and egg question. Does the FX series exist because Ryan Reynolds and Rob McElhenney took a flyer on buying Wrexham FC, a downtrodden Welsh soccer squad? Or was the possibility of “Welcome to Wrexham” a main reason for the purchase in the first place?

The fact that both answers seem plausible is never all that far from the show itself. McElhenney and Reynolds talk in early interviews about their elaborate pandemic purchase, a gambit made between social media buddies whose first in-person meeting is captured by these documentary cameras. They’re the marquee attraction in the charming opening episode, which gets as close to off-the-cuff and unguarded as press-savvy comedy stars get.

Before long, though, the pair have to embrace the fact that they’re mixing an entrepreneurial endeavor with some real-life human emotion hanging in the balance. Though “Welcome to Wrexham” never strays too far from familiar behind-the-scenes documentary rhythms, it’s documenting an elaborate experiment. Wrexham, a side stuck in the lowest rung on the UK soccer ladder, is the kind of team that could welcome a shakeup. At the same time, Reynolds and McElhenney see the club as a test case for whether an influx of funding and a jolt to a fanbase can do more harm than good. In the pyramid of UK football, their end goal isn’t necessarily to be the best team, but merely get the chance to play against better ones.

The parts of “Welcome to Wrexham” that stick in Wales are a pretty effective portrait of a town, made in the traditional community portrait mode. Cameras follow Wrexham players into their private lives, catching them in semi-candid moments with family members or home improvement projects. Those are fitted in between everyday glimpses of their surroundings, a once-booming manufacturing town that has seen a gradual decline in production, both on the pitch and in local factory work. “Welcome to Wrexham” keeps an overall spirit of optimism, though, as each look back at the problems of the recent past give way to the prospect that this wild card venture could be the rising tide that lifts all of the area’s boats. 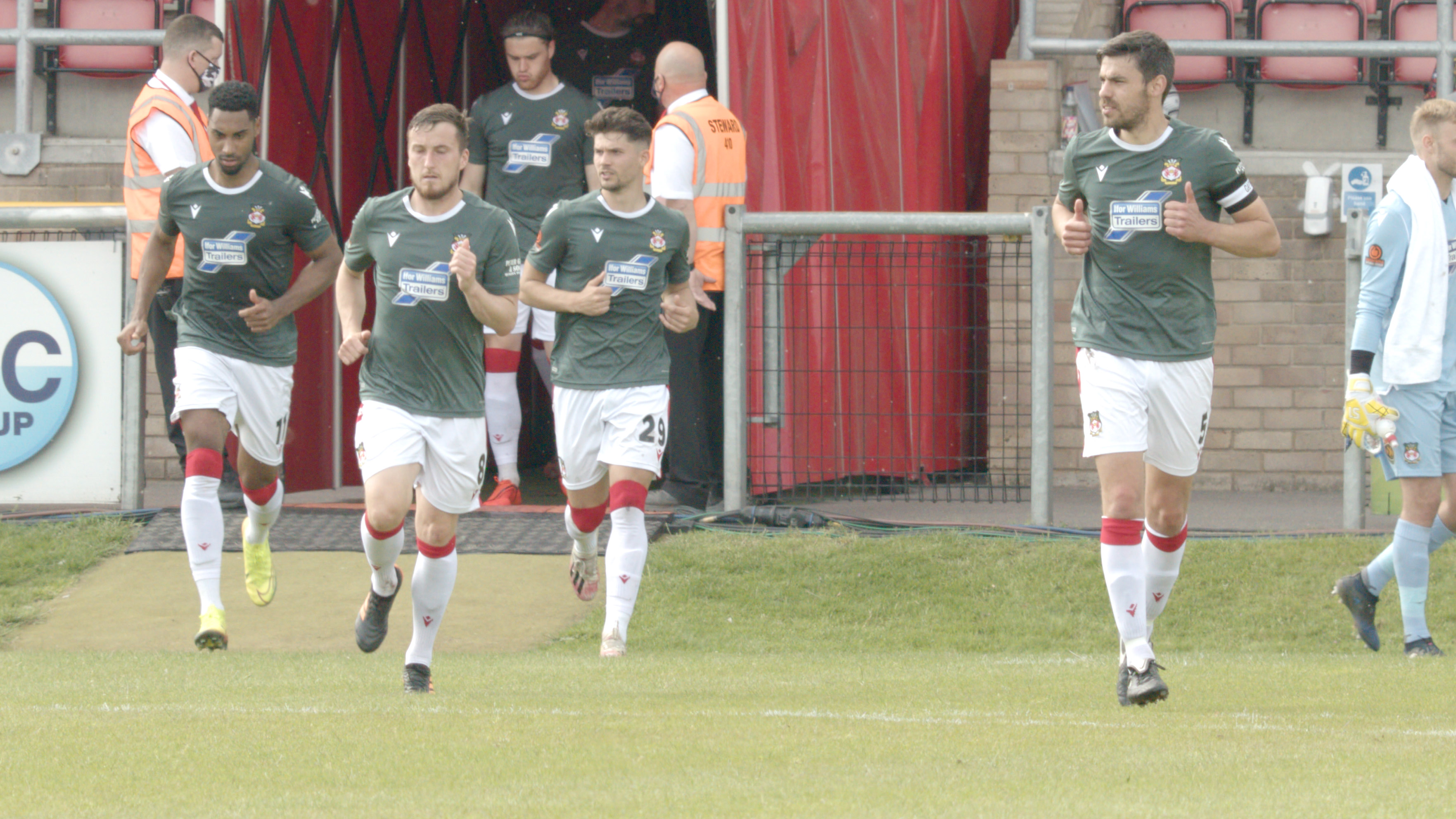 And that look at Wrexham extends out past the roster. Tiny glimpses into the grounds crew’s duties dovetail nicely with input from local pub owners to team volunteers to lifelong die-hard fans. (In the UK, they’re “supporters,” something that the occasional cheeky on-screen “translation” graphics could point out.) They don’t last long enough to get a particularly full grip on any one person, but many of them make enough of an impression that they register in crowd shots episodes later.

The opening episode of the series drafts off of the unpredictability that Reynolds and McElhenney’s gambit brings to the team and the city as a whole. Them interacting directly with supporters and existing team management, even through Zoom, gives a bit of fish-out-of-water energy to the process. But by the time the sale is finalized, the pair gets relegated to reacting from afar. It’s not that they’re not involved — there are plenty of sequences showing them drumming up publicity in different venues or McElhenney streaming matches from the other side of the world. There are just enough logistical obstacles to keep these seesaw halves of “Welcome to Wrexham” from fully meshing.

With Rob in Los Angeles in the “Always Sunny” writers room and Ryan at various undisclosed locations via FaceTime, one figure that emerges is Humphrey Ker. A writer on “Mythic Quest” and a central cast member on NBC’s best new show, Ker becomes the unofficial envoy/resident British football whisperer for the new owners. He’s the vector for explaining fan interest in certain player acquisitions, conveying certain operating costs, and helping a pair of high-profile soccer neophytes appreciate the subtler aspects of this project. He also does as much as anyone can in this series to shake up its calculated nature. Any time he draws McElhenney and Reynolds’ plans away from neat sports branding opportunity and closer to reality, everyone involved is better for it. 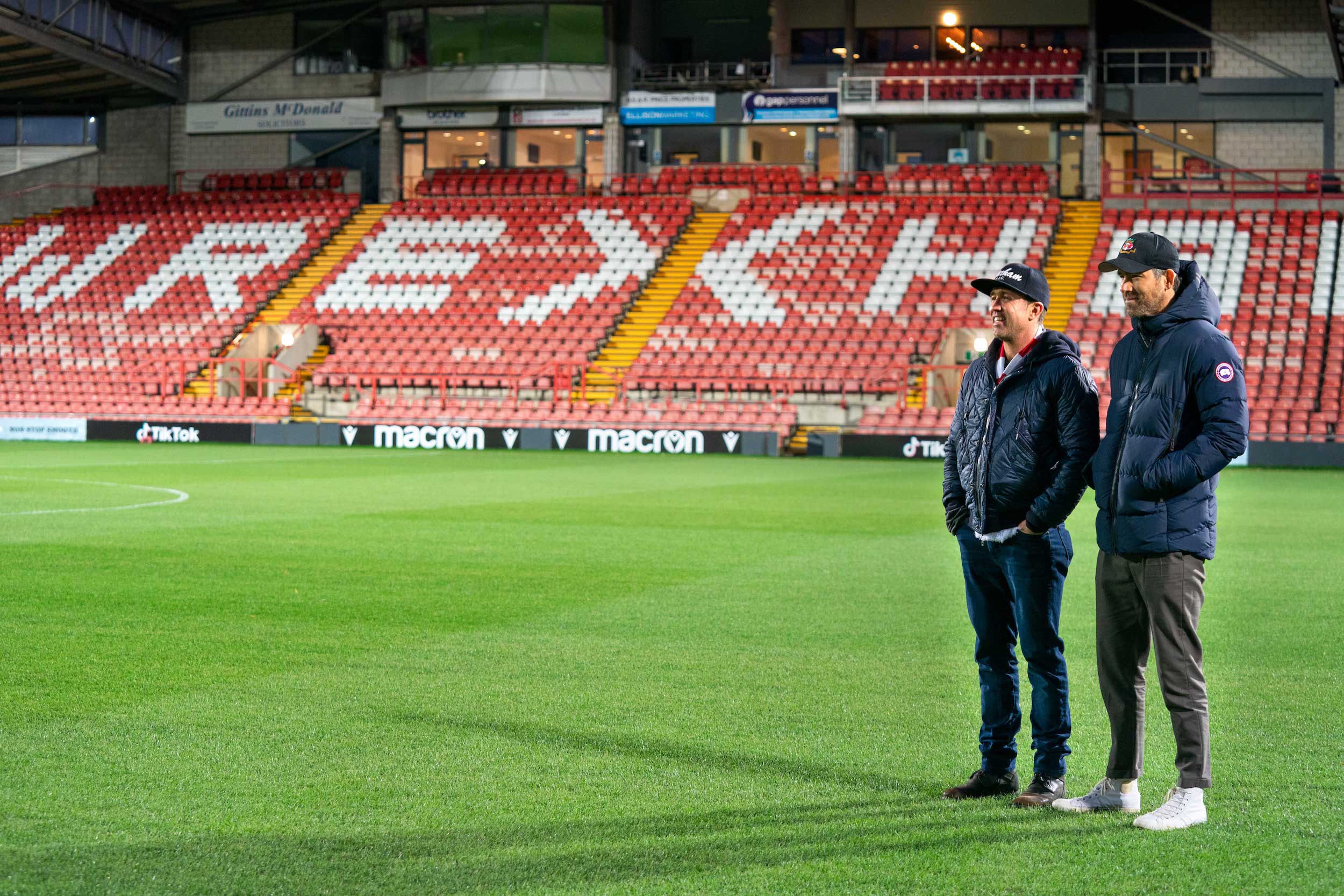 “Welcome to Wrexham” runs into a challenge that any season-long sports doc has to contend with, in one way or another. Outside of some clearly defined, make-or-break spots on a timeline, it’s hard for some of these matches to stick out as something other than parts of a months-long churn. The game footage itself hovers between the kind of glossy promotional kick tailor-made for an Instagram Reel and the reality of playing in a less-glamorous UK football division. Adding in some cell phone camera footage from the stands gives an added fan’s-eye view that similar docs rarely make room for.

As much as portions of the show feel like glowing portraits, “Welcome to Wrexham” does gradually settle into acknowledging what everyone else slowly realizes. The Wrexham club (enterprising Googlers can confirm) do not become a world-beating sensation overnight. Their transformation comes with a certain amount of growing pains, one that the show does its best to adjust to. Overall, “Welcome to Wrexham” begins as a transatlantic hype video and continues as something that’s more resistant to instant gratification.

In that way, it’s on the verge of some bigger insights into the nature of ownership and fandom and how the relationship between those two changes sports on a fundamental level. The majority of the feedback from the people of Wrexham is shown to be positive, but not everyone is won over from the start. Similarly, the show benefits from early good will but has to contend with the expectations that come after. The foundation is there for “Welcome to Wrexham” to succeed. Like the team it’s chronicling, it just has to figure out its identity first.

“Welcome to Wrexham” premieres Wednesday, August 24 at 10 p.m. ET on FX. New episodes air weekly and will be available to stream the following day on Hulu.