Home » TV & Movies » What is Michelle planning to do to Robert in Coronation Street?

What is Michelle planning to do to Robert in Coronation Street? 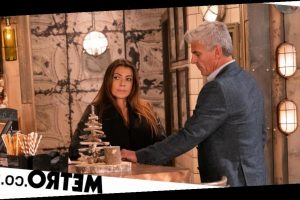 Michelle Connor (Kym Marsh) has been hellbent on revenge since she found out about Robert Preston (Tristan Gemmill)’s secret affair in Coronation Street.

The pair’s wedding day is looming, but Michelle has discovered the cheating love rat has been living a double life with his pregnant fiancee Vicky Jeffries (Kerri Quinn) and is set to take him for everything he’s got.

All of which sets the scene for some explosive moments this week – but just what is Michelle planning to do to Robert?

Here’s what you need to know…

What is Michelle planning to do to Robert in Coronation Street?

While Michelle may have made out she has forgiven Robert, that’s anything but the case.

Monday night’s episode of the soap will see the couple having a pre-wedding celebration at the Bistro with their loved ones – but problems arise when Vicki shows up and causes conflict.

Robert does his best to get rid of her, and succeeds in doing so – with Michelle later suggesting to Robert that her name should be on the Bistro deeds instead of his.

He agrees and goes along with it – with Michelle revealing to Carla (Alison King) that she’s planning to expose the truth at the wedding and take the Bistro from him.

But when the wedding comes Robert’s vows seem heartfelt and emotional – leaving us to wonder whether Michelle can go through with her plan after all, or whether she really will remember how much she loves him?

You’ll have to tune in to find out what happens – but with both characters due to depart the soap at the end of the year we’re guessing it won’t be plain sailing for the pair.

Things are set to take a more dramatic turn after Michelle orders Robert to ban Vicky from the ceremony, and he goes to visit her to tell her this – only for a neighbour to hear the couple shouting, before a resounding noise, and total silence.

Robert later returns to Weatherfield and tells Michelle that Vicky won’t be a problem – leaving the question of whether he has killed her and her unborn baby, something he’s set to be accused of.

And things could get even darker before the character departs, with rumours that he’ll be killed in a Christmas siege.

Is he about to pay an even bigger price than Michelle had in mind? You’ll just have to keep watching…

Got a showbiz story?