Reprising the 1970s series following an elite unit of the LAPD doesn't come without its challenges dealing with a new social paradigm. Sergeant Daniel "Hondo" Harrelson (Shemar Moore) aims to make good on the political stunt that saw him promoted to team leader, his soulful, strong-jawed mooching aiming for meaningful change in community attitudes to the force, but this week sees his crew protecting the elite as a series of armed robberies terrorise the city's one per centers. Add an unconvincing revenge plotline tipping its hat to the perils of social media and slut shaming, lines like "SWAT is LAPD's best and brightest and they're all over this" and a villain worthy of Scooby Do and yeah … nah. 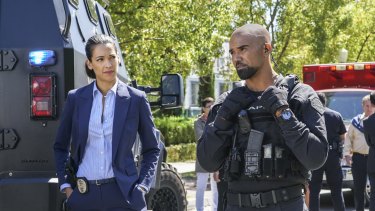 Hooray to see The New York Times swimming upstream by launching a weekly documentary series centred on its lead investigative stories. Recent episodes have focused heavily on the Trump administration but this week's expose of a suicide crisis among New York cab drivers, traced to a perfect storm of maladministration over driver permits, will bear painful parallels for local cabbies whose licenses have been devalued by deregulation and the rise of ride-share services such as Uber. In the Big Apple, driver Mohammad Hossain has a debt of $700,000 for a permit that earns him $22,000 a year. Reporter Brian M. Rosenthal's investigation implicates brokers, fleet owners and city officials in artificially inflating permit prices, reaping massive profits while immigrant drivers are harnessed to impossible loans.