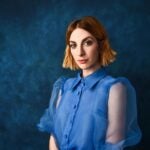 Bernard, who idolized the Broadway star, thought to herself, “I’m going to have to talk about [Foster’s] pubic hair on national television?! Maybe I shouldn’t go in for this…I like her too much.” But it was for that same reason why Bernard jumped at the chance.

During the audition, Star explained to Bernard that her character wasn’t judging Liza’s below-the-belt grooming situation — or lack thereof — she was just curious. Bernard told WrapWomen that it was the way Lauren approached even the most uncomfortable situations like this — with wonder and confidence — that made her want to be a part of the show.

Over the years, Bernard and Sutton’s friendship grew on and off the screen. On Bernard’s last day of filming, Sutton surprised her on set. “As soon as they called series wrap on me, she flew in and gave me a big hug,” she told WrapWomen. “I think the tenderness of those moments I will hold onto forever.”

Check out the interview in the video at the top.

The seventh and final season of “Younger” is streaming on Paramount+.